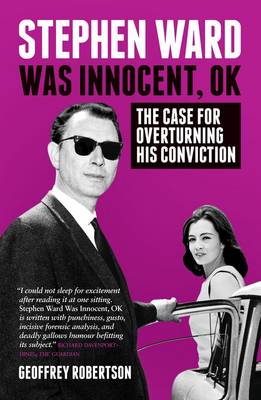 The Case for Overturning his Conviction

Geoffrey Robertson brings his forensic skills and a deeply felt sense of injustice to the case at the heart of the Profumo affair, the notorious scandal that brought down a government.

In the summer of '61 John Profumo, Minister for War, enjoyed a brief affair with Christine Keeler...Late in the afternoon of Wednesday 31 July 1963, Dr Stephen Ward was convicted at the Old Bailey on two counts alleging that he lived on the earnings of a prostitute. He was not in the dock but comatose in hospital. The previous night he had attempted suicide, because (as he said in a note) 'after Marshall's [the judge's] summing up, I've given up all hope'. He died on Saturday 3 August, without regaining consciousness. Many observers of the proceedings thought the convictions did not reflect the evidence and that the trial was unfair, and this book will show that it breached basic standards of justice. Geoffrey Robertson brings his forensic skills and a deeply felt sense of injustice to the case at the heart of the Profumo affair, the notorious scandal that brought down a government.

» Have you read this book? We'd like to know what you think about it - write a review about Stephen Ward Was Innocent, OK book by Geoffrey Robertson QC and you'll earn 50c in Boomerang Bucks loyalty dollars (you must be a Boomerang Books Account Holder - it's free to sign up and there are great benefits!)

Geoffrey Robertson QC has had a distinguished career as a trial counsel, human rights advocate and United Nations judge. He appeared in many celebrated Old Bailey trials, defending the editors of Oz magazine and Gay News, as well as the National Theatre over its staging of The Romans in Britain, and Matrix Churchill in the case that exposed the 'Iraqgate' scandal and helped to bring down John Major's government. He served as first president of the UN war crimes court in Sierra Leone and on the UN Justice Council (2008 - 12). Mr Robertson is founder and co-head of Doughty Street Chambers. He held the office of Recorder (part-time judge) for many years and is a Master of the Middle Temple. His books include The Tyrannicide Brief (the story of how Cromwell's lawyers mounted the trial of Charles I), and an acclaimed memoir, The Justice Game. In 2011 he received the Award for Distinction in International Law and Affairs from the New York State Bar Association.

A Preview for this title is currently not available.
More Books By Geoffrey Robertson QC
View All