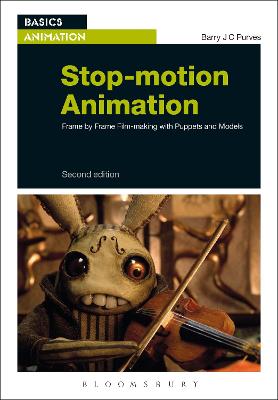 Frame by Frame Film-making with Puppets and Models 2nd edition

Stop-motion Animation explores how all the elements of film-making - camera work, design, colour, lighting, editing, music and storytelling - come together in this unique art form. With tips and suggestions to help you get the most out of your films, and with examples from some of the masters of the craft, Barry Purves shows how to make the most of the movement, characters and stories that typify stop-motion.

With dozens of beautiful new examples from around the world, this new edition includes a project in each chapter, with pointers on finding a story and characters, developing a script and storyboard, constructing puppets and dealing with the practicalities of film-making. These projects combine to lead you through the creation of your first one-minute stop-motion animation. » Have you read this book? We'd like to know what you think about it - write a review about Stop-motion Animation book by Barry JC Purves and you'll earn 50c in Boomerang Bucks loyalty dollars (you must be a Boomerang Books Account Holder - it's free to sign up and there are great benefits!)

Barry Purves is an English animator, director and writer of puppet animation television and cinema and theatre designer and director, primarily for the Altrincham Garrick Playhouse in Manchester. Known as one of Britain's most celebrated animators on account of his six short films, each of which has been nominated for numerous international awards (including Academy Award and British Academy Film Awards nominations), he has also directed and animated for several television programs and over seventy advertisements, title sequences and animated insert sequences.

A Preview for this title is currently not available.
More Books By Barry JC Purves
View All

Stop-motion Animation: Frame by Frame Film-making with Puppets and Models
$72.62 $80.69