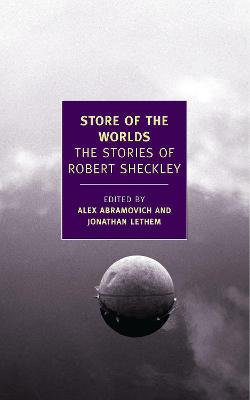 Store Of The Worlds

Description - Store Of The Worlds by Robert Sheckley

Robert Sheckley was science fiction's in-house reply to theblack humorists of the 1950s and 60s- Bruce Jay Friedman,Terry Southern, and the young Thomas Pynchon were his nonetoo-distant relatives; Mort Sahl's comedy, Charles Schultz'scartoons, and Tom Lehrer's songs all mined similar veins.Sheckley targeted the conformity and consumerism of ourmid-century technotopia while it was still under construction.His new worlds, alternate universes, and future dystopias haveonly become more present with the passing years, even as hiscareer, played out both in the pulp magazines and in front-linevenues like Playboy and Omni, is a glimpse of a time when"science fiction writer" could be a kind of hipster credential.Mordant, absurdist, and deadpan, the best of Sheckley's dissidentfarces represent science fiction's high-water mark as anallegorical clearinghouse for twenty-century angst.

Book Reviews - Store Of The Worlds by Robert Sheckley

» Have you read this book? We'd like to know what you think about it - write a review about Store Of The Worlds book by Robert Sheckley and you'll earn 50c in Boomerang Bucks loyalty dollars (you must be a Boomerang Books Account Holder - it's free to sign up and there are great benefits!)

Robert Sheckley (1928-2005) was born in New York City and raised in Maplewood, New Jersey. He joined the army shortly after high school and served in Korea from 1946 to 1948. Returning to New York, Sheckley completed a BA degree at New York University and later took a job in an aircraft factory, leaving as soon as he was able to support himself by selling short stories. In the 1950s and '60s his stories appeared regularly in science-fiction magazines, especially Galaxy, as well as in Playboy and Esquire. In addition to the science fiction for which he is best known, Sheckley also wrote suspense and mystery stories and television screenplays; from 1979 to 1982 he was the fiction editor of Omni magazine. Sheckley traveled widely, settling for stretches of time in Greenwich Village, Ibiza, London, and Portland, Oregon. Many of Sheckley's more than fifteen novels and roughly four hundred short stories have been translated and four have been adapted for film. In 2001 he was named Author Emeritus by the Science Fiction and Fantasy Writers of America. Alex Abramovich has been an editor of Feed, Flavorpill, and Very Short List and a writer