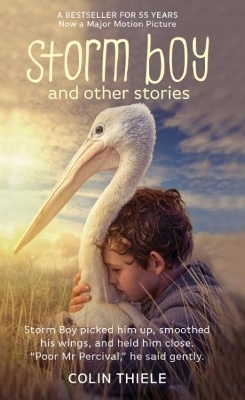 Storm Boy and Other Stories

Description - Storm Boy and Other Stories by Colin Thiele

p>b>For ages: 8 + years/b>/p> p>A moving story which is now a major motion picture, Storm Boy is one of the classics of Australian writing for children. Storm Boy saves the life of Mr Percival, and in return the pelican helps Storm Boy s father with his fishing and joins in the rescue of a shipwrecked crew. The boy and the pelican prove friends to the end./p> p>A favourite story, beautifully told./p> p>Includes other favourites: The Water Trolley - The Lock-Out - Dad Ran a Fowl Run - The Shell - The Fish Scales/p> p>Film Release : 10th of January 2019 in Cinema s across Australia as a major release. Sony Pictures have purchased the Australia and NZ rights for release in January 2019. A contemporary re-telling of the 1976 iconic family film, Storm Boy was filmed in South Australia with Geoffrey Rush will star as Mike Storm Boy Kingley, who recounts his childhood adventures to troubled teen granddaughter Madeline in an effort to prevent her from making the same mistakes he made years before. He tells her the story of his boyhood a heart-warming tale about unusual friendship and unconditional love./p>

Book Reviews - Storm Boy and Other Stories by Colin Thiele

» Have you read this book? We'd like to know what you think about it - write a review about Storm Boy and Other Stories book by Colin Thiele and you'll earn 50c in Boomerang Bucks loyalty dollars (you must be a Boomerang Books Account Holder - it's free to sign up and there are great benefits!)