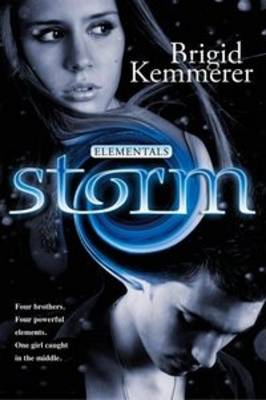 When Becca Chandler saves Chris Merrick from being beaten up in the school parking lot, she has no idea how dramatically this one action will change her life. Because Chris Merrick is no ordinary guy and neither are his three older brothers. The Merrick boys are Elementals. Hot. Powerful. Dangerous. Marked for death. And now that she knows the truth, so is Becca.

With her life at stake, she doesn't know who to trust or whose secrets she should keep. Hunter, the mysterious new kid with a talent for being in the wrong place at the right time, might be the one boy Becca can put her faith in. But with two boys vying for her affections, and pressure rising all around her, will she find out in time who's hiding the most dangerous truth of all?

» Have you read this book? We'd like to know what you think about it - write a review about Storm: Elementals 1 book by Brigid Kemmerer and you'll earn 50c in Boomerang Bucks loyalty dollars (you must be a Boomerang Books Account Holder - it's free to sign up and there are great benefits!)

It's late night in an abandoned parking lot, but Becca Chandler can't just stand there and watch Chris Merrick be cruelly beaten upon by two older guys. From the moment she saves his life, she unwittingly marks herself as a target. The Merrick brothers are not ordinary. They're Elementals, each with a strong power over an individual element - water, earth, fire and air. They are dangerously powerful and those that know of their abilities want them very dead.

Allow me to take a moment to express the depth of my love for the Merrick brothers. I'll get the obvious thought out of the way first: HOLY SWOONSVILLE! Clear the top spots on your Best Boyfriend Lists, because these boys are about to rumble the very foundations of Hotness. But do you want to know what makes them compelling? They are REAL. They are FLAWED. They are FUNNY. They are FRUSTRATING. They are so goddamn amazing. I loved how you're not told that the brothers share a strong and messy bond, you discover the many complexities of their relationships. The fights and the resentment, the banter and camaraderie, the fierce protectiveness and loyalty. Family relationships this brilliant are rarely explored so well in paranormal novels.

Chris is the youngest brother and deep down, a little lonely. Twins, Gabriel and Nick, are a tight-knit duo, combining one's recklessness with the other's intelligence for their naughty schemes. Michael is the eldest and while he and Chris once shared more of a closer bond, Michael is weighed down with heavy responsibility that's shifted his role in the family. Chris is the slightly more 'innocent' of the brothers... but don't mistaken that for a naive little boy. Just in comparison to the others, he's a little more sweeter, a little more younger, but no less fierce or brave or challenging. He may not have as much experience with girls as the twins, but it's his lack of experience that makes him all the more endearing. That hint of nervousness that sweeps through him at times around Becca. I loved how they could both shake each other up. Also, did I mention he's a sweetheart? <3

The characters of this novel are what make it such a standout. Is Brigid Kemmerer really at teenage boy in disguise? 5 times over? The dialogue and mannerisms and the way they express themselves... she nails it! And what about Becca, who is one of my new favourite heroines? This is the kind of protagonist I LOVE. She doesn't take crap from people. After a douche named Drew ruined her reputation, she's had to deal with the fallout every day since. And though it affects her, she still puts up a hell of a fight. Her vulnerability and strength shine through so admirably - she'll stand up for herself, verbally or physically when needed - yet she not a complete hardass. She has such a beautiful a heart and cares more than she should. I really don't know who I love more - her or the boys. I'm definitely not choosing teams!

And then there is Hunter. He's a new kid in town and won me over the moment he opened his mouth. Let's just say his entrance to the story? Total. Freaking. Win. I was cheering him on. Hunter is just as complex and compelling as the Merrick's. He comes off very open and friendly and is guaranteed to pull on your heartstrings, but you do sense a mystery in the shadows. Perhaps he's hiding a few secrets of his own.... People people will call the romance in this a 'love triangle' but I really don't want to attach that label to it. Because it's not what you expect when you hear those words. There are two potential suitors for Becca, yes, but she doesn't spend the entire novel obsessing over which boy to choose. It all develops so organically, so naturally, that you're tangled up in the complicated web before you even realise what's happening. And both boys will have a hold over your heart - I honestly could not choose a favourite. It feels so real and rich and more than just a romance, yet still sexy and heart-pounding and throws you off balance in the best freaking way.

Storm is a smashing debut that combines the thrills and danger of a paranormal with the emotional weight you often find in a contemporary. Brigid paints the raw, gritty reality of bullying so amazingly well. The verbal taunts that dig under your skin and the physical violence that spirals out of control. Her story will inspire and motivate you, make you snort laughter or clutch your heart in despair. It will cause irreparable health damage after you've just swooned eight times over in the one chapter. Her characters are literally tearing at the pages while you're trying to read, so life-like that an ink and paper prison cannot contain them. Storm is that novel that can't stop flicking back through days after finishing, with characters you're still quoting years after and a compelling paranormal edge that is about to take the YA world by storm.

Brigid Kemmerer hails from Pasadena, Maryland, where she works in the finance industry. STORM: ELEMENTALS 1 is her first novel. You can visit her on brigidkemmerer.com.