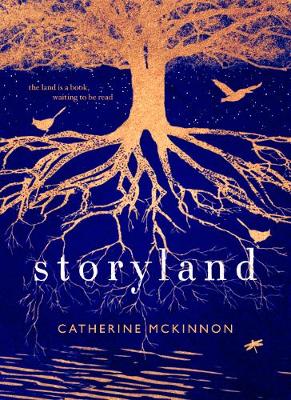 An ambitious, remarkable and moving novel about who we are: our past, present and future, and our connection to this land.

'Storyland is a worthy contender for the Great Australian Novel - encompassing, ambitious' Readings

In 1796, a young cabin boy, Will Martin, goes on a voyage of discovery in the Tom Thumb with Matthew Flinders and Mr Bass: two men and a boy in a tiny boat on an exploratory journey south from Sydney Cove to the Illawarra, full of hope and dreams, daring and fearfulness.

Set on the banks of Lake Illawarra and spanning four centuries, Storyland is a unique and compelling novel of people and place - which tells in essence the story of Australia. Told in an unfurling narrative of interlinking stories, in a style reminiscent of David Mitchell's Cloud Atlas, McKinnon weaves together the stories of Will Martin together with the stories of four others: a desperate ex-convict, Hawker, who commits an act of terrible brutality; Lola, who in 1900 runs a dairy farm on the Illawarra with her brother and sister, when they come under suspicion for a crime they did not commit; Bel, a young girl who goes on a rafting adventure with her friends in 1998 and is unexpectedly caught up in violent events; and in 2033, Nada, who sees her world start to crumble apart. Intriguingly, all these characters are all connected - not only through the same land and water they inhabit over the decades, but also by tendrils of blood, history, memory and property...

Compelling, thrilling and ambitious, Storyland is our story, the story of Australia. 'The land is a book waiting to be read' as one of the characters says - and this novel tells us an unforgettable and unputdownable story of our history, our present and our future.

Storyland has been shortlisted for the 2018 Miles Franklin Award, the Barbara Jefferis Award and the Voss Award.

'A beautifully woven story ... a devastating retelling of man's effect on the land and the native people, and offers a chilling insight into what may come to pass with climate change. Storyland is reminiscent of Patrick White's A Fringe of Leaves, Kate Grenville's The Secret River and The Lieutenant ... and even, dare I say, a bit of Tim Winton's Cloudstreet.' Books+Publishing

'Impressive ... a haunted and haunting power' The Australian

'This is a book I will return to multiple times, both for its beauty and subtlety and for the sheer pleasure of experiencing the world it reflects.' Otago Daily Times

'It just might be the real story of Australia' Qantas Magazine

» Have you read this book? We'd like to know what you think about it - write a review about Storyland book by Catherine McKinnon and you'll earn 50c in Boomerang Bucks loyalty dollars (you must be a Boomerang Books Account Holder - it's free to sign up and there are great benefits!)

“’See that lake there,’ Uncle Ray says, looking along the side of his house to the water. ‘That was here before any of us, and that creek that runs down from the mountain to the lake, that was here too, and the mountain, and the trees, and the birds. We’re part of their story, not the other way around’”

Storyland is the second novel by Australian teacher, playwright, theatre director and author, Catherine McKinnon. A cabin boy, an ex-convict, a dairy farmer, a young schoolgirl and a middle-aged woman are the narrators that McKinnon uses to tell a tale that spans centuries.

Will Martin is the fifteen-year-old cabin boy who accompanies Bass and Flinders in the Tom Thumb in 1796 on a trip south to find a river for the Governor. They unintentionally end up near Hat Hill, in desperate need of fresh water but are wary of the natives they encounter.

Will has earlier learned bits of their language and the Southern sky: “Now I gaze up at the stars and moon every night and, moreover, speak the in two languages, where once I did not give thought to them at all. Now I know how big the world is. Before, not knowing the world’s bigness meant that tomorrow looked like yesterday. Yet knowing makes it harder to spy ahead, as now I see tomorrow as unmade and know it will always be so”

Tending cornfields and fending off the natives on the shores of this godforsaken lake with only a lazy skulker to help is not what ex-convict Hawker wants to be doing in the harvest time of 1822. Trying to impress the landowner’s overseer in the hope of a transfer to the cooler climes and better conditions of Appin, he perpetrates a shocking act of violence.

In 1900, Lola McBride runs a herd of 21 Illawarra Red Shorthorn cattle with her half-sister Mary and her half-brother, Abe, right by Mullet Creek at the edge of the Five Islands Estate. They are surprised to encounter a derogatory attitude from a neighbour, and when his daughter disappears, is quick to lay blame.

Ten-year-old Bel is glad to relieve the boredom of the 1997-8 Christmas Holidays rafting along the shores of Lake Illawarra with new-found friends, Isha and Tarak. Her dad says it’s OK as long as they stick to the rules they’ve agreed on. But when they meet Kristie in their special place, some of those rules go out the window.

In 2033, Cyclone Frank has caused more devastation than any earlier storm Nada has ever experienced, and now Ben is sick. She decides to leave their cottage on the slopes of Mount Kembla to get the medication he needs, but the world she finds below is unrecognisable, in more ways than one. The format of this book will be familiar to readers of David Mitchell’s Cloud Atlas: each narrative nestled within an earlier one. They stop mid-sentence, but segue smoothly into the next facilitated by pelicans, owls, eagles and whipbirds. Connection to place is a common theme, but these disparate stories are also connected by people, objects, landmarks, vegetation and blood ties. McKinnon uses her tale to explore interactions between indigenous and whites, and how cruelty, ignorance and racist attitudes changed with time. She also touches on ownership of artefacts and sacred sites, and climate change and rising oceans. Her descriptive prose is gorgeous, and her extensive research is apparent in every paragraph. Readers familiar with the area will doubtless be trying to identify the locations of each narrative. All this is contained inside a wonderfully evocative cover. A superlative read.