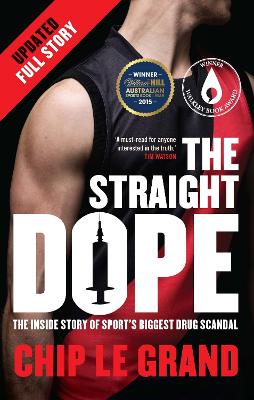 Winner of the 2015 Walkley Book Award and the 2015 William Hill Sports Book of the Year. Updated with latest developments

The greatest drugs scandal in Australian sport goes well beyond who took what. What happened at Essendon, what happened at Cronulla, is only part of the story.

From the basement office of a suburban football club to the seedy corners of Peptide Alley to the polished corridors of Parliament House, The Straight Dope is an inside account of the politics, greed and personal feuds that fuelled an extraordinary saga.

Clubs and coaches determined to win, a sports scientist who doesn't play by the rules, a generation of footballers injected with who knows what, sport administrators hell bent on control, an anti-doping authority out of its depth, an unpopular government that just wants it to end ... for three years until the final, crushing judgement handed down by an international tribunal, this was the biggest game in Australia.

» Have you read this book? We'd like to know what you think about it - write a review about Straight Dope Updated Edition book by Chip Le Grand and you'll earn 50c in Boomerang Bucks loyalty dollars (you must be a Boomerang Books Account Holder - it's free to sign up and there are great benefits!)

Chip Le Grand is a journalist who has written about sport, crime and politics for more than 20 years. His coverage of the Essendon drugs scandal won awards from the Melbourne Press Club and the Australian Sports Commission. The Straight Dope is the winner of the 2015 Walkley Book Award and the William Hill Australian Sports Book of the Year.

A Preview for this title is currently not available.
More Books By Chip Le Grand
View All