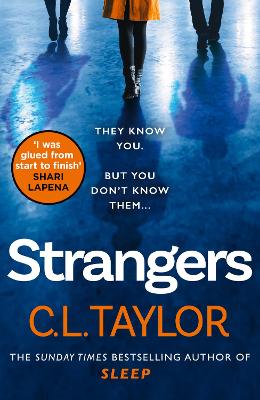 The Sunday Times bestseller and Richard & Judy Book Club author of Sleep returns with her most gripping book yet.

'I was glued from start to finish!' SHARI LAPENA

Ursula, Gareth and Alice have never met before.

Ursula thinks she killed the love of her life.

And Alice is being stalked.

None of them are used to relying on others - but when the three strangers' lives unexpectedly collide, there's only one thing for it: they have to stick together. Otherwise, one of them will die.

The million-copy bestseller returns with a gripping new novel that will keep you guessing until the end.

Other Editions - Strangers by C.L. Taylor » Have you read this book? We'd like to know what you think about it - write a review about Strangers book by C.L. Taylor and you'll earn 50c in Boomerang Bucks loyalty dollars (you must be a Boomerang Books Account Holder - it's free to sign up and there are great benefits!)

5 stars Strangers is the seventh novel by award-winning British author, C.L.Taylor. When her kleptomanic tendencies see Ursula Andrews evicted from her share-house, the only alternative to living in her delivery van is to take a room in Edward Bennett’s house. It may be bland and characterless, but it’s clean and the bedroom is big: she can put up with his quirks, and there’s really nothing she’ll be tempted to steal…

Now divorced two lonely years, Alice Fletcher’s first experience with Tinder is awful: Michael Easton is drunk and obnoxious, but the silver lining was Simon, who witnesses it all and returns the purse she’d dropped in the fracas.

Twenty years after his father disappeared without a trace, Gareth Finer’s life consists of his work as a security supervisor at the Meads, and evenings caring for his demented mother. Is it the postcard in his father’s writing that has him seeing a man who could easily be his missing parent on the shopping centre’s CCTV?

They are effectively strangers, although their disparate lives have overlapped in small ways. So how does it happen that, one week later, the three of them are standing over a dead body in an exclusive fashion boutique in a Bristol shopping centre?

The story is mainly carried by narratives from three perspectives, with some tweets relating to recent events interspersed. Taylor’s characters have depth and very human flaws, and none is quite what they first seem; her plot is gripping, with red herrings and diversions that keep the reader guessing right up to the final jaw-dropping chapter. Brilliant British crime fiction. This unbiased review is from an uncorrected proof copy provided by NetGalley and Harper Collins Australia.

A Preview for this title is currently not available.
More Books By C.L. Taylor
View All