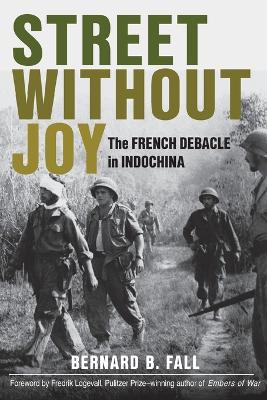 The French Debacle in Indochina

First published in 1961 by Stackpole Books, Street without Joy is a classic of military
history. Journalist and scholar Bernard Fall vividly captured the sights, sounds, and
smells of the brutal - and politically complicated - conflict between the French and the
Communist-led Vietnamese nationalists in Indochina. The French fought to the bitter
end, but even with the lethal advantages of a modern military, they could not stave
off the Viet Minh insurgency of hit-and-run tactics, ambushes, booby traps, and
nighttime raids. The final French defeat came at Dien Bien Phu in 1954, setting the
stage for American involvement and a far bloodier chapter in Vietnam`s history. Fall
combined graphic reporting with deep scholarly knowledge of Vietnam and its colonial
history in a book memorable in its descriptions of jungle fighting and insightful in its
arguments. After more than a half a century in print, Street without Joy remains
required reading.

» Have you read this book? We'd like to know what you think about it - write a review about Street without Joy book by Bernard Fall and you'll earn 50c in Boomerang Bucks loyalty dollars (you must be a Boomerang Books Account Holder - it's free to sign up and there are great benefits!)

Bernard Fall was born in Vienna in 1926, migrating to France in 1938. After his father was killed by the Gestapo and his mother killed at Auschwitz, he joined the French Resistance at sixteen, then the French Army. Following World War II, he was an analyst with the Nuremberg War Crimes Tribunal. Coming to the U.S. in the early 1950s, he earned a masters and a doctorate at Syracuse. He first traveled to Indochina in 1953, returning in 1957, 1962, 1965, 1966, and 1967, when he was killed by a mine on the "street without joy," the highway he had described in his book. His other books include Hell in a Very Small Place (PB, Da Capo).

A Preview for this title is currently not available.
More Books By Bernard Fall
View All