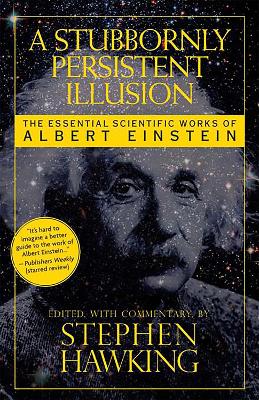 With commentary by the greatest physicist of our time, Stephen Hawking, this anthology has garnered impressive reviews. PW has called it a gem of a collection while New Scientist magazine notes the thrill of reading Einsteins own words. From the writings that revealed the famous Theory of Relativity, to other papers that shook the scientific world of the 20th century, A Stubbornly Persistent Illusion belongs in every science fans library.

» Have you read this book? We'd like to know what you think about it - write a review about Stubbornly Persistent Illusion book by Stephen Hawking and you'll earn 50c in Boomerang Bucks loyalty dollars (you must be a Boomerang Books Account Holder - it's free to sign up and there are great benefits!)

Stephen Hawking has become a scientific celebrity" of sorts, ever since his A Brief History of Time was published. He has been described as the most intelligent man in the world today," according to the Chicago Sun-Times and as the scientific heir to Einstein, Newton, and Galileo" by People magazine. He lives in Cambridge, England.

A Preview for this title is currently not available.
More Books By Stephen Hawking
View All