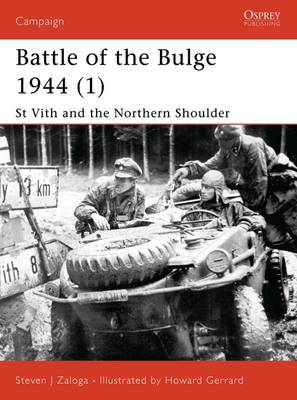 St.Vith and the Northern Shoulder 1944

Battle of the Bulge Pt. 1

Description - St.Vith and the Northern Shoulder 1944 by Steven J. Zaloga

The Battle of the Bulge was the largest and most costly battle fought by the US Army in World War II. The Ardennes fighting was Hitler's last gamble on the Western Front, crippling the Wehrmacht for the remainder of the war. In the first of two volumes on the Ardennes campaign Steven Zaloga details the fighting in the northern sector around St Vith and the Elsenborn Ridge. Sixth Panzer Army, containing the bulk of German Panzer strength, was expected to achieve the breakthrough here. It was the failure around St Vith that forced the Germans to look south towards Bastogne.

» Have you read this book? We'd like to know what you think about it - write a review about St.Vith and the Northern Shoulder 1944 book by Steven J. Zaloga and you'll earn 50c in Boomerang Bucks loyalty dollars (you must be a Boomerang Books Account Holder - it's free to sign up and there are great benefits!)

Steven J. Zaloga was born in 1952, received his BA in history from Union College, and his MA from Columbia University. He has published numerous books and articles dealing with modern military technology, especially armoured vehicle development. His main area of interest is military affairs in the former Soviet Union and Eastern Europe in the Second World War, and he has also written extensively on American armoured forces.