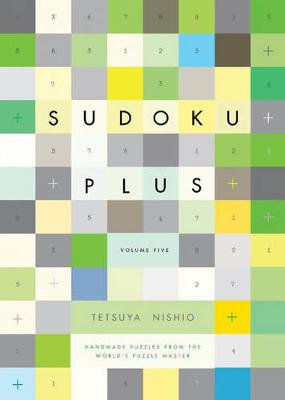 A collection of puzzles conceived by Japan's greatest puzzle master, Tetsuya Nishio. Nishio takes great pleasure hand crafting these tricky teasers for legions of brave Sudoku fans across the world. In this popular series, he provides 101 Sudoku plus an assortment of new puzzles, so once fans have conquered the Sudoku, they can test out a whole new line of gaming torture! The price point, trim and level of difficulty have all been especially tailored to perfectly suit the gamer on the move.

» Have you read this book? We'd like to know what you think about it - write a review about Sudoku Plus Volume 5 book by Nishio Tetsuya and you'll earn 50c in Boomerang Bucks loyalty dollars (you must be a Boomerang Books Account Holder - it's free to sign up and there are great benefits!)

The Times of London calls Tetsuya Nishio the undisputed grand "puzzle master" of Sudoku: "a bespectacled fiend from the darkest suburbs of Tokyo who spends his every waking hour devising abominable new ways to torture our brain cells." Tetsuya invented O-ekaki puzzles in the late 1980s, and is one of the first puzzle developers to custom-make logic puzzles such as Sudoku, which had until then been computer creations. Nishio is also the chairman of the Japan Puzzle Team at the annual World Puzzle Championships, and is a contributor to Higher Sudoku.

A Preview for this title is currently not available.
More Books By Nishio Tetsuya
View All