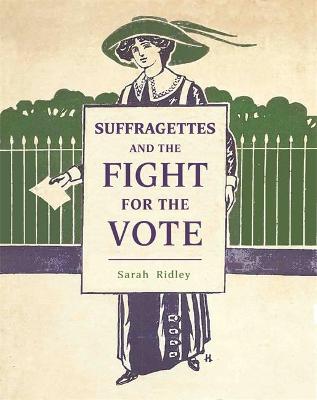 Suffragettes and the Fight for the Vote

Description - Suffragettes and the Fight for the Vote by Sarah Ridley

This book tells the story of the campaign to get women the vote in Britain. Beginning by looking at the role of women in the 19th Century and ending with the continuing struggle for equal rights for women in all parts of society, this is an essential read for young people aged 10 plus to understand the history of the women's movement on suffrage. It includes the suffragists' campaign. The book includes photos of key people in the campaign such as Millicent Garrett Fawcett, Emmeline Pankhurst and Emily Wilding Davison and ephemera such as force-feeding equipment, banners and medallions.The book was long-listed for the 2017 SLA information book award. It is published ahead of 2018 - a landmark year that marks the centenary of the Representation of the People Act. This finally gave the vote to some women for the first time (women over 30, who owned property) and also gave the vote to all men (up until then, only about two-thirds of men had the vote). The Houses of Parliament are celebrating this centenary with their 'Vote 100' project. 2018 will also be the 90th anniversary of women gaining full voting equality with men in 1928.

Buy Suffragettes and the Fight for the Vote by Sarah Ridley from Australia's Online Independent Bookstore, Boomerang Books. » Have you read this book? We'd like to know what you think about it - write a review about Suffragettes and the Fight for the Vote book by Sarah Ridley and you'll earn 50c in Boomerang Bucks loyalty dollars (you must be a Boomerang Books Account Holder - it's free to sign up and there are great benefits!)

Born in Suffolk, Sarah Ridley lives on the Suffolk/Essex border and is a writer and editor of educational books for children and young people. Recently, a life-long interest in history has led her to write books about the First World War, inspired by reading letters written by soldiers who served in the conflict. Brothers at War tells the story of uncovering the material held in her own family's archives. Dear Jelly sets letters written by soldier brothers to their younger sisters at its core. Teenage children keep Sarah busy when she isn't tied to her computer, and she relaxes by walking along river estuaries close to her home.

A Preview for this title is currently not available.
More Books By Sarah Ridley
View All