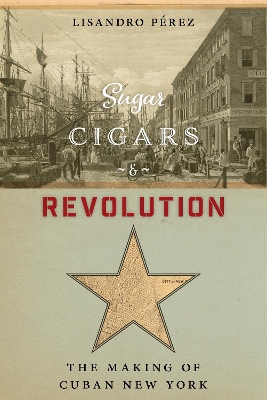 Sugar, Cigars, and Revolution: The Making of Cuban New York

Winner, 2020 Herbert H. Lehman Prize for Distinguished Scholarship in New York history
Honorable Mention, 2019 CASA Literary Prize for Studies on Latinos in the United States, given by La Casa de las Americas
The dramatic story of the origins of the Cuban community in nineteenth-century New York.
More than one hundred years before the Cuban Revolution of 1959 sparked an exodus that created today's prominent Cuban American presence, Cubans were settling in New York City in what became largest community of Latin Americans in the nineteenth-century Northeast. This book brings this community to vivid life, tracing its formation and how it was shaped by both the sugar trade and the long struggle for independence from Spain. New York City's refineries bought vast quantities of raw sugar from Cuba, ultimately creating an important center of commerce for Cuban emigres as the island tumbled into the tumultuous decades that would close out the century and define Cuban nationhood and identity.
New York became the primary destination for Cuban emigres in search of an education, opportunity, wealth, to start a new life or forget an old one, to evade royal authority, plot a revolution, experience freedom, or to buy and sell goods. While many of their stories ended tragically, others were steeped in heroism and sacrifice, and still others in opportunism and mendacity. Lisandro Perez beautifully weaves together all these stories, showing the rise of a vibrant and influential community. Historically rich and engrossing, Sugar, Cigars, and Revolution immerses the reader in the riveting drama of Cuban New York.
Lisandro Perez analyzes the major forces that shaped the community, but also tells the stories of individuals and families that made up the fabric of a little-known immigrant world that represents the origins of New York City's dynamic Latino presence.

Other Editions - Sugar, Cigars, and Revolution: The Making of Cuban New York by Lisandro Perez » Have you read this book? We'd like to know what you think about it - write a review about Sugar, Cigars, and Revolution: The Making of Cuban New York book by Lisandro Perez and you'll earn 50c in Boomerang Bucks loyalty dollars (you must be a Boomerang Books Account Holder - it's free to sign up and there are great benefits!)


A Preview for this title is currently not available.
More Books By Lisandro Perez
View All