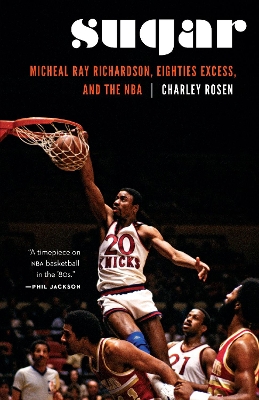 The 1980s were arguably the NBA's best decade, giving rise to Magic Johnson, Larry Bird, and Michael Jordan. They were among the game's greatest players who brought pro basketball out of its 1970s funk and made it faster, more fluid, and more exciting. Off the court the game was changing rapidly too, with the draft lottery, shoe commercials, and a style driven largely by excess.

One player who personified the eighties excess is Micheal Ray Richardson. During his eight-year career in the NBA (1978-86), he was a four-time All-Star, twice named to the All-Defense team, and the first player to lead the league in both assists and steals. He was also a heavy cocaine user who went on days-long binges but continued to be signed by teams that hoped he'd get straight. Eventually he was the first and only player to be permanently disqualified from the NBA for repeat drug use.

Tracking the rise, fall, and eventual redemption of Richardson throughout his playing days and subsequent coaching career, Charley Rosen describes the life-defining pitfalls Richardson and other players faced and considers key themes such as off-court and on-court racism, anti-Semitism, womanizing, allegations of point-shaving within the league, and drug and alcohol abuse by star players.

By constructing his various lines of narration around the polarizing figure of Richardson-equal parts basketball savant, drug addict, and pariah-Rosen illuminates some of the more unseemly aspects of the NBA during this period, going behind the scenes to provide an account of what the league's darker side was like during its celebrated golden age.

» Have you read this book? We'd like to know what you think about it - write a review about Sugar book by Charley Rosen and you'll earn 50c in Boomerang Bucks loyalty dollars (you must be a Boomerang Books Account Holder - it's free to sign up and there are great benefits!)

Charley Rosen is a writer who previously worked as an NBA analyst for FOXSports.com and whose work has appeared on Fanragsports.com. He is the author of twenty-one sports books, including The Chosen Game: A Jewish Basketball History (Nebraska, 2017) and Crazy Basketball: A Life In and Out of Bounds (Nebraska, 2011). He has coauthored two books with NBA coach Phil Jackson.