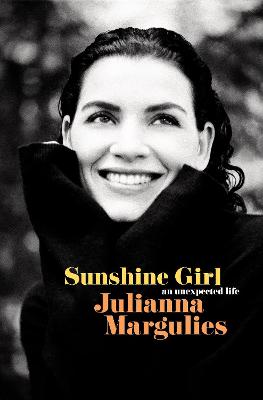 Known for her outstanding performances on The Good Wife and ER, Julianna Margulies now unleashes her sharp talent with a powerful debut memoir chronicling her life and her work, examining from within her journey from chaos to calm.

"When an actor is on a long running television show, especially when the writing is superb as was the case with The Good Wife, the character becomes a second skin; they grow as you grow, they change as you change. Being an actress gives me the luxury of discovering myself. All the feelings that came up from playing Alicia allowed me to look back at my life and tap into my own vulnerability. My personal fear of the unknown reared its ugly head as I studied this character, most likely stemming from the ever-present unpredictability of my childhood." --from the introduction

An apple-cheeked bubbly child, Julianna Margulies was bestowed the nickname "Sunshine Girl" by her mother at an early age. Raised between two divorced parents, often on different continents, Julianna quickly learned how to be of value to her eccentric mother and her absent father. Raised in fairly unconventional ways in various homes in Paris, England, New York, and New Hampshire, Julianna's role among the turmoil and uncertainty surrounding her was to comfort those around her, find organization among the disorder, and eventually make her way in the world as a young adult and eventually an award-winning actress.

Along the way, there were complicated relationships, difficult choices, and overwhelming rejections. But there were also the moments that fate, faith, and talent assembled in a perfect storm that led to the roles of a lifetime, both professionally and personally.

Unflinchingly honest and perceptive, filled with 40 never-before-seen photos, Sunshine Girl is a riveting self-portrait of a woman whose resilience in the face of turmoil will leave readers intrigued and inspired.

» Have you read this book? We'd like to know what you think about it - write a review about Sunshine Girl: An Unexpected Life book by Julianna Margulies and you'll earn 50c in Boomerang Bucks loyalty dollars (you must be a Boomerang Books Account Holder - it's free to sign up and there are great benefits!)

A Preview for this title is currently not available.
More Books By Julianna Margulies
View All