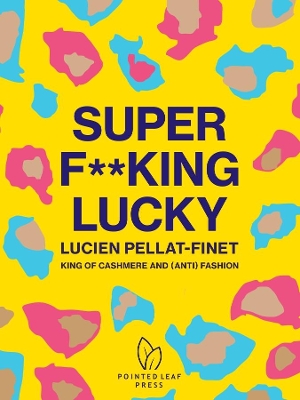 As Lucien Pellat-Finet and his eponymous fashion label celebrate 25 years, he looks back on his life and career and how he became the King of Cashmere. A proponent of streetwear chic, he is reputed for his signature use of symbols such as the hemp leaf, peace sign, iconic cartoon characters, and skulls on the most exquisite and luxurious sweaters. Super F**king Lucky traces the moments and places that have left a lasting effect on his style and aesthetic. From his childhood on France's legendary Cote D'Azur, to getting stoned on Ipanema Beach in 1968, to being discovered as a model by the iconic designer Pierre Cardin; to styling Thierry Mugler's fashion shows in the 1970s to witnessing the skateboard and biker cultures of California - these experiences come through in his effortlessly elegant and collectible clothes made for men, women, and children. Super F**king Lucky is a bold and thrilling look, as well as an intimate portrait, of an original, irreverent, and out-of-the-mainstream designer. AUTHOR: Natasha Fraser-Cavassoni is an author, journalist, and leading expert on Paris, luxury and lifestyle. Her books include Sam Spiegel, Chanel Fashion, Tino Zervudachi, Dior Glamour, Monsieur Dior, Loulou de la Falaise, BiYan, Vogue on Yves Saint Laurent, Vogue on Calvin Klein and her memoir, After Andy Adventures in Warhol Land. From 1999 2004, she was the European editor for Harper's Bazaar, after being a staff member at Women's Wear Daily and W, and assisting Karl Lagerfeld at the Chanel studio. Fraser-Cavassoni lives in Paris with her two daughters. 138 colour, 34 b/w photographs

» Have you read this book? We'd like to know what you think about it - write a review about Super F**king Lucky: Lucien Pellat-Finet: King of Cashmere and (Anti) Fashion book by Natasha Fraser-Cavassoni and you'll earn 50c in Boomerang Bucks loyalty dollars (you must be a Boomerang Books Account Holder - it's free to sign up and there are great benefits!)