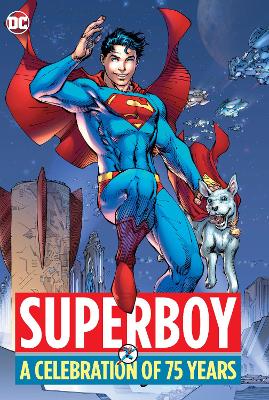 Superboy: A Celebration of 75 Years

Description - Superboy: A Celebration of 75 Years by Various

Originally introduced in 1949, Superboy has grown to stand for so much more than just "tales of Superman when he was a boy." Today he is Jonathan Kent, teenage son of Clark Kent and Lois Lane, best friend of Robin, and a young man on the verge of becoming a true hero.

Originally introduced as "Superman when he was a boy," the heroic mantle of Superboy has been worn by several super-powered beings over the decades. This new hardcover celebrates them all, from young Clark Kent in tales from his schoolboy days in Smallville, to Superboy's 1970s adventures in the 30th century with the Legion of Super-Heroes, to today's young Jonathan Kent, son of Clark and Lois Lane. This title includes Superboy's most memorable adventures, as written and illustrated by some of comics' top talents, including Geoff Johns, Dave Cockrum (co-creator of the New X-Men) and many others.

Book Reviews - Superboy: A Celebration of 75 Years by Various

» Have you read this book? We'd like to know what you think about it - write a review about Superboy: A Celebration of 75 Years book by Various and you'll earn 50c in Boomerang Bucks loyalty dollars (you must be a Boomerang Books Account Holder - it's free to sign up and there are great benefits!)