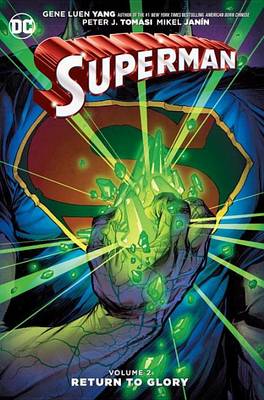 Life as Superman knew it is no more. He's lost his identity as Clark Kent, his job and almost all of his powers. But he's still Superman. And, powers or no, he's determined to uncover the mastermind that's taken everything from him.

Superman's investigation leads him to an underground super fight club called Mythbrawl, which he joins to make ends meet while he tracks down Hodor_Root, leader of the crime syndicate that leverages secrets for power. Yet he soon discovers the real threat comes from Hodor_Root's "father," Vandal Savage, and his orchestrated campaign to reclaim the comet that granted him immortality aeons ago. If Savage succeeds, he'll grow powerful beyond imagining. And with the comet drawing closer to Earth, Savage's "spawn" popping up all over the world and most of Superman's allies incapacitated, there's no way a powerless Kal-El can persevere...unless he taps into the one thing that, whether he wins or loses, will take its toll on Krypton's last son.

It's the beginning of the end for the Man of Steel, chronicled by Eisner Award winner Gene Luen Yang (American Born Chinese) and Peter J. Tomasi (SUPERMAN/WONDER WOMAN), and featuring stunning artwork from Howard Porter (JUSTICE LEAGUE #3001) and Mikel Janin, among others. Collects SUPERMAN #45-52 and SUPERMAN ANNUAL #3.

» Have you read this book? We'd like to know what you think about it - write a review about Superman TP Vol 2 book by Gene Luen Yang and you'll earn 50c in Boomerang Bucks loyalty dollars (you must be a Boomerang Books Account Holder - it's free to sign up and there are great benefits!)

Gene Luen Yang began making comics and graphic novels over fifteen years ago. In 2006, his book American Born Chinese was published by First Second Books. aIt became the first graphic novel to be nominated for a National Book Award and the first to win the American Library Association's Printz Award. It also won an Eisner Award for Best Graphic Album - New. In 2013, First Second Books released Boxers & Saints, his two-volume graphic novel about the Boxer Rebellion. aBoxers & Saints was nominated for a National Book Award and won the L.A. Times Book Prize. His other works include the comics continuation of the popular Nickelodeon cartoon Avatar- The Last Airbender. Currently, he writes SUPERMAN for DC Comics.