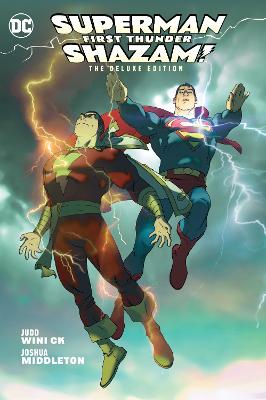 Witness the thunderous first meeting of the Last Son of Krypton, Superman and Earth's Mightiest Mortal, Shazam in the acclaimed Superman/Shazam!- First Thunder, now collected in this hardcover deluxe edition.

While Superman must stop members of a cult from stealing an ancient artifact from the Metropolis Natural History Museum, in Fawcett City, Shazam must defeat rampaging giant mechanical monsters. When the same cult attempts to pays a visit to the Fawcett City Museum, Superman drops by and teams up with Shazam against an all-new threat only the combined might of Superman and Shazam can stop!

In an oversize deluxe hardcover for the first time ever, Superman/Shazam!- First Thunder is a great jumping-on point for new readers and a fantastic introduction to the character who will star in Spring 2019's feature film Shazam from Warner Bros. Collects issues #1-4.

» Have you read this book? We'd like to know what you think about it - write a review about Superman/Shazam!: First Thunder: Deluxe Edition book by Judd Winick and you'll earn 50c in Boomerang Bucks loyalty dollars (you must be a Boomerang Books Account Holder - it's free to sign up and there are great benefits!)


A Preview for this title is currently not available.
More Books By Judd Winick
View All