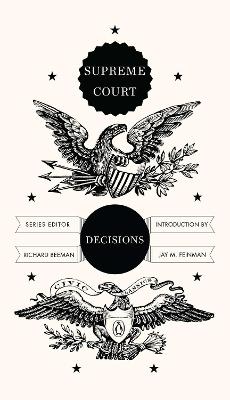 The Supreme Court is one of America's leading interpreters of values and daily life. In this volume, legal expert Jay Feinman has collected, abridged, and explained some of the most important decisions of all time-on issues ranging from freedoms of speech and religion to the powers of government-to make the opinions of the most powerful court in the land accessible to all.
Penguin Books Civic Classics
The Declaration of Independence and The United States Constitution Common Sense/Thomas Paine The Federalist Papers Alexander Hamilton, James Madison, and John Jay Lincoln Speeches/Abraham Lincoln American Political Speeches Supreme Court Decisions Penguin presents great essential texts of American civic life in a portable and accessible series for the politically engaged. Richard Beeman and leading experts introduce the founding documents, pivotal historic speeches, important Supreme Court decision, and historic writings, both revolutionary and inspiring, that express core principles and ideals, raise issues, and tell a story about the American experiment in self-government.
These are the words, ideas, and actions that have shaped American society and government since their founding and that continue to matter and empower. By mapping out our constitutional history, Civic Classics help us navigate through our present challenges, a journey better enjoyed as a participant rather than a bystander.

» Have you read this book? We'd like to know what you think about it - write a review about Supreme Court Decisions book by Richard Beeman and you'll earn 50c in Boomerang Bucks loyalty dollars (you must be a Boomerang Books Account Holder - it's free to sign up and there are great benefits!)

Jay M. Feinman is Distinguished Professor of Law at Rutgers University School of Law, Camden. He is the bestselling author of six previous books, including Law 101: Everything You Need to Know About American Law and Delay, Deny, Defend: Why Insurance Companies Don't Pay Claims and What You Can Do About It, and more than fifty scholarly articles. His scholarly work has been widely cited by courts, including the United States Supreme Court. Professor Feinman is a member of the American Law Institute. At Rutgers, he has served as acting dean of the law school and has received numerous awards for teaching excellence. Richard Beeman, the John Welsh Centennial Professor of History Emeritus at the University of Pennsylvania, has previously served as the Chair of the Department of History, Associate Dean in Penn's School of Arts and Sciences, and Dean of the College of Arts of Sciences. He serves as a trustee of the National Constitution Center and on the center's executive committee. Author of seven previous books, among them The Penguin Guide to the United States Constitution and Plain Honest Men: The Making of the American Constitution, Professor Beeman has received numerous grants and awards including fellowships from the National Endowment for the Humanities, the Rockefeller Foundation, the Institute for Advanced Study at Princeton, and the Huntington Library. His biography of Patrick Henry was a finalist for the National Book Award.

A Preview for this title is currently not available.
More Books By Richard Beeman
View All

The Declaration of Independence and the United States Constitution
$27.73 $30.81