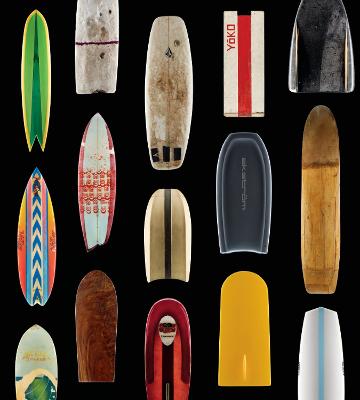 Design and the Culture of Board Riding

The evolution of the surfboard, from traditional Hawaiian folk designs to masterpieces of mathematical engineering to mass-produced fiberglass.

Surfboards were once made of wood and shaped by hand, objects of both cultural and recreational significance. Today most surfboards are mass-produced with fiberglass and a stew of petrochemicals, moving (or floating) billboards for athletes and their brands, emphasizing the commercial rather than the cultural. Surf Craft maps this evolution, examining surfboard design and craft with 150 color images and an insightful text. From the ancient Hawaiian alaia, the traditional board of the common people, to the unadorned boards designed with mathematical precision (but built by hand) by Bob Simmons, to the store-bought longboards popularized by the 1959 surf-exploitation movie Gidget, board design reflects both aesthetics and history. The decline of traditional alaia board riding is not only an example of a lost art but also a metaphor for the disintegration of traditional culture after the Republic of Hawaii was overthrown and annexed in the 1890s.
In his text, Richard Kenvin looks at the craft and design of surfboards from a historical and cultural perspective. He views board design as an exemplary model of mingei, or art of the people, and the craft philosophy of Soetsu Yanagi. Yanagi believed that a design's true beauty and purpose are revealed when it is put to its intended use. In its purest form, the craft of board building, along with the act of surfing itself, exemplifies mingei. Surf Craft pays particular attention to Bob Simmons's boards, which are striking examples of this kind of functional design, mirroring the work of postwar modern California designers.
Surf Craft is published in conjunction with an exhibition at San Diego's Mingei International Museum.

» Have you read this book? We'd like to know what you think about it - write a review about Surf Craft book by Richard Kenvin and you'll earn 50c in Boomerang Bucks loyalty dollars (you must be a Boomerang Books Account Holder - it's free to sign up and there are great benefits!)

Richard Kenvin is Director of the Hydrodynamica Project. He writes for The Surfer's Journal and is the guest curator of the Surf Craft exhibition.