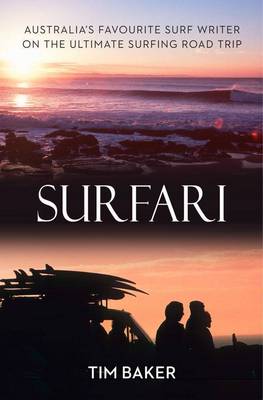 All surfers dream of shedding responsibilities and answering the siren's call of ocean swells. For most, it is an ideal that recedes as age advances - as family, career and provider fatigue threatens to overwhelm the wanderlust of youth. But what if you could defy the slow march of age? Shelve all your worldly pressures, pack up the family and a few trusty surfboards and hit the open road for the Great Australian surfing road trip? Inspired by the dreams of his youth, surf writer Tim Baker embarks on the Big Lap in search of the perfect wave and domestic bliss. Surfari documents the state of surf culture and our coastline, and the array of colourful characters who inhabit these parts, evoking all the magic, charm and challenges such a lifestyle entails. It is a story for anyone who has ever dreamed of an alternative to the busy, micro-scheduled existence of work, school, shopping and the daily drudge. The result is a lively, colourful account of what happens when you trade your life for another variety, and the delights and dangers that lay in wait when you dare to chase your dreams and follow another path.

» Have you read this book? We'd like to know what you think about it - write a review about Surfari book by Tim Baker and you'll earn 50c in Boomerang Bucks loyalty dollars (you must be a Boomerang Books Account Holder - it's free to sign up and there are great benefits!)

Tim Baker is the best-selling author of- "Bustin' Down The Door," (Harper Collins, 1996), "High Surf" (Harper Collins, 2007), "Occy" (Random House, 2008) and "Surf For Your Life," (Random House, 2009). He is a former editor of Tracks and Surfing Life magazines. He has twice won the Surfing Australia Hall of Fame Culture Award and been nominated for the CUB Australian Sports Writing Awards. His work has appeared in Rolling Stone, the Sydney Morning Herald, the Australian Financial Review, the Bulletin, Inside Sport, Playboy, GQ, the Surfers Journal, Qantas - the Australian Way, as well as surfing magazines around the world. He is currently a senior contributor to Surfing World, Surfer's Path (UK), the Surfers Journal and US Surfing and Surfer magazines. He has appeared at the Sydney and Byron Bay Writers Festivals, and has conducted writing workshops at the Hunter, Sydney and the Northern Rivers Writers Centre. At 45, he has worked in the media and surfing magazines for 25 years and has surfed and traveled throughout Australia, Indonesia, Hawaii, Central and South America, North America, Europe, South Africa, Fiji, Tahiti, and Sri Lanka. He lives in Currumbin, Queensland, with