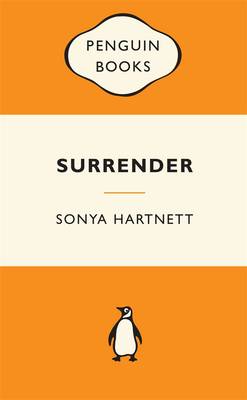 As life slips away, Gabriel looks back over his brief twenty years that have been clouded by frustration and humiliation. A small town and distant parents ensure that he is never allowed to forget the horrific mistake he made as a child.

As life slips away, Gabriel looks back over his brief twenty years that have been clouded by frustration and humiliation. A small town and distant parents ensure that he is never allowed to forget the horrific mistake he made as a child. He has only two friends - his dog Surrender, and the unruly wild boy Finnigan, with whom he made a boyhood pact. When a series of arson attacks grips the town, Gabriel realises how unpredictable and dangerous Finnegan is. Events begin to spiral out of control, and it becomes clear that only the most extreme of measures will rid Gabriel of Finnegan for good.

» Have you read this book? We'd like to know what you think about it - write a review about Surrender: Popular Penguins book by Sonya Hartnett and you'll earn 50c in Boomerang Bucks loyalty dollars (you must be a Boomerang Books Account Holder - it's free to sign up and there are great benefits!)