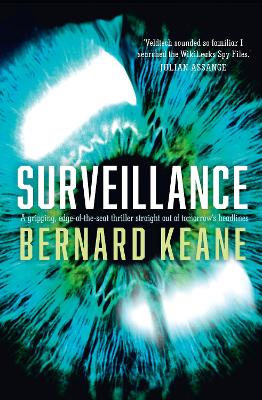 A ruthless online activist group called Kittehsaurus Rox has hacked into top-secret Cabinet information and gone public with it, creating widespread panic and embarrassing a government that will stop at nothing to hunt down 'KSR'.

Journalist and cyber-expert Kat Sharpe is chosen by KSR to break news of their operations, and overnight she becomes the media sensation she has always longed to be. But as she gets closer to KSR and its circle of supporters, she can't shake the feeling that something doesn't add up.

Cybersecurity company Veldtech Industries is in line to make a fortune out of the carnage created by the hackers. But they have their own desperate secrets to protect - from the government and from each other.

Surveillance is a thrilling, timely novel about the price we pay for our 'security' and the lengths companies - and governments - will go to hide the truth.

» Have you read this book? We'd like to know what you think about it - write a review about Surveillance book by Bernard Keane and you'll earn 50c in Boomerang Bucks loyalty dollars (you must be a Boomerang Books Account Holder - it's free to sign up and there are great benefits!)

Bernard Keane has been Crikey's correspondent in Canberra since 2008, writing on politics, media and economics. He was educated at the University of Sydney, where he studied history. Before joining Crikey he was a public servant and speechwriter in transport and communications. He is the author of the ebook War On The Internet and co-author of A Short History of Stupid, with Helen Razer. Surveillance is his first novel.

Lies and Falsehoods: The Morrison Government and the New Culture of Deceit
$19.31 $22.99