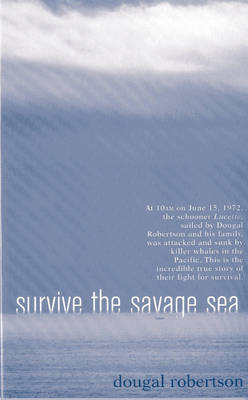 After their 43-foot schooner was stove in by a pod of killer whales, the six members of the Robertson family spent 37 days adrift in the Pacific. With no maps, compass, or navigational instruments, and rations for only three days, they used every survival technique they could as they battled 20-foot waves, marauding sharks, thirst, starvation, and exhaustion.

Other Editions - Survive the Savage Sea by Dougal Robertson » Have you read this book? We'd like to know what you think about it - write a review about Survive the Savage Sea book by Dougal Robertson and you'll earn 50c in Boomerang Bucks loyalty dollars (you must be a Boomerang Books Account Holder - it's free to sign up and there are great benefits!)

Dougal Robertson was born in Scotland in 1924 and spent the war in the Merchant Marine. He and his wife Lyn lived on a farm in England for a number of years before deciding to go on a circumnavigation with their children. They now live in France.

A Preview for this title is currently not available.
More Books By Dougal Robertson
View All