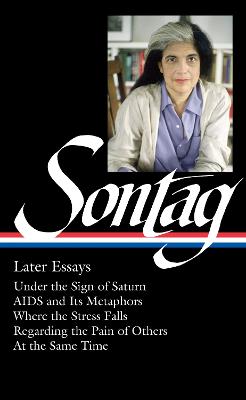 Regarding the Pain of Others / At the Same Time

An unprecedented collection of the controversial later writings of the greatest and most provocative critic of our time.

Susan Sontag was the most influential critic of her time. This second volume in Library of America's definitive Sontag edition gathers all the collected essays and speeches from her last quarter-century, brilliant works whose subjects, from the AIDS epidemic, 9/11, the Iraq war, and the perverse allure of Fascism to painting, dance, music, film, and scintillating literary portraits of such writers as Walter Benjamin, Roland Barthes, Antonin Artaud, Machado de Assis, Jorge Luis Borges, Nadine Gordimer, Joseph Brodsky, W. G. Sebald, Marina Tsvetayeva, and Robert Walser, bear enduring witness to passionate curiosity and expansive intellect. She brings to every subject an unwavering focus and intensity, and a deep commitment to "extending our sense of what a human life can be," as she said on accepting the Jerusalem Prize in 2000. An account of her 1993 residence in war-torn Sarajevo to stage a production of Waiting for Godot becomes a meditation on the meaning of culture- "Culture, serious culture, is an expression of human dignity-which is what people in Sarajevo feel they have lost." AIDS and Its Metaphors marks a further development of the central ideas of her classic Illness as Metaphor, while Regarding the Pain of Others explores eloquently the troubling moral issues surrounding photographic depictions of violence, cruelty, and atrocity.

» Have you read this book? We'd like to know what you think about it - write a review about Susan Sontag: Later Essays book by Susan Sontag and you'll earn 50c in Boomerang Bucks loyalty dollars (you must be a Boomerang Books Account Holder - it's free to sign up and there are great benefits!)

David Rieff is the author of Swimming in a Sea of Death: A Son's Memoir and editor of the journals and notebooks of Susan Sontag, of which two volumes have appeared to date, and of the Library of America companion volume Susan Sontag: Essays of the 1960s & 70s. His many other books include At the Point of a Gun: Democratic Dreams and Armed Intervention, A Bed for the Night: Humanitarianism in Crisis, The Reproach of Hunger: Food, Justice, and Money in the Twenty-First Century, and In Praise of Forgetting: Historical Memory and Its Ironies.

A Preview for this title is currently not available.
More Books By Susan Sontag
View All