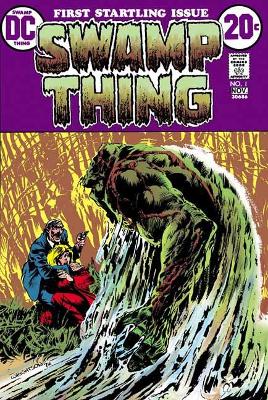 The roots of one of DC's greatest--and strangest--heroes of all time are collected here in their entirety in the giant-size SWAMP THING- THE BRONZE AGE OMNIBUS VOL. 1!

From his first appearance in HOUSE OF SECRETS from creators Len Wein and Bernie Wrightson, the adventures of Swamp Thing have been some of the most terrifying and epic tales in DC Universe lore. These stories gave birth to such classic characters as Dr. Anton Arcane, the Un-Men, Abigail Arcane and more! This giant compendium edition collects all the Bronze Age stories featuring Alec Holland's nightmarish alter ego!

» Have you read this book? We'd like to know what you think about it - write a review about Swamp Thing The Bronze Age Omnibus HC book by Len Wein and you'll earn 50c in Boomerang Bucks loyalty dollars (you must be a Boomerang Books Account Holder - it's free to sign up and there are great benefits!)

Comics, TV, and movie writer Len Wein began his career in comics 40 years ago. He has been editor-in-chief of Marvel Comics, Disney Comics, and Top Cow, as well as a senior editor at DC Comics. He is the co-creator of the comic book series SWAMP THING, HUMAN TARGET, BROTHER VOODOO, WOLVERINE, and THE NEW X-MEN. His new feature-length screenplay of SWAMP THING is currently in development with Silver Pictures, and he has also written the screenplay for WHIRLWIND, a new super-heroine for POW! Entertainment. He is currently at work on several other projects. Wein recently returned to SWAMP THING with a new bestselling miniseries.

A Preview for this title is currently not available.
More Books By Len Wein
View All