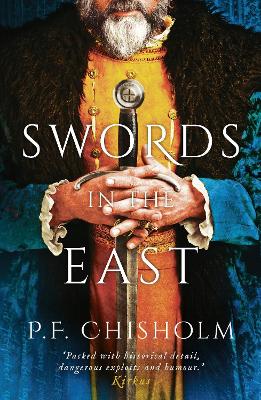 Swords in the East

Description - Swords in the East by P.F. Chisholm

A new omnibus in the highly acclaimed Sir Robert Carey Mysteries. Perfect for fans of C.J. Sansom and S.J. Parris. 1592. Sir Robert Carey abandoned the ambition and treachery of Queen Elizabeth I's court to take up the post of Deputy Warden of the West March, aided by his surly, larcenous, and loyal henchman Henry Dodd, Land Sergeant of Gilsland. As Carey struggles to solve the murder of a local minister , he battles with his deep adoration of Lady Elizabeth Widdrington, while despising her elderly, abusive husband - will the man never die? During his investigation, Carey encounters King James IV, his amoral favourite Lord Spynie, the fey Lady Hume, Mr Anricks - a surprisingly skilled tooth drawer - and, finally, a plot to topple the Scottish Court. Plunging readers straight into the raucous world of late-sixteenth century border reivers and unfettered Elizabethan intrigue, Swords in the East , the third chronicle of Sir Robert Carey's adventures, collects the novels A Chorus of Innocents and A Clash of Spheres under one volume. A Chorus of Innocents 2015. A Clash of Spheres 2017.

Other Editions - Swords in the East by P.F. Chisholm Book Reviews - Swords in the East by P.F. Chisholm

» Have you read this book? We'd like to know what you think about it - write a review about Swords in the East book by P.F. Chisholm and you'll earn 50c in Boomerang Bucks loyalty dollars (you must be a Boomerang Books Account Holder - it's free to sign up and there are great benefits!)


A Preview for this title is currently not available.
More Books By P.F. Chisholm
View All