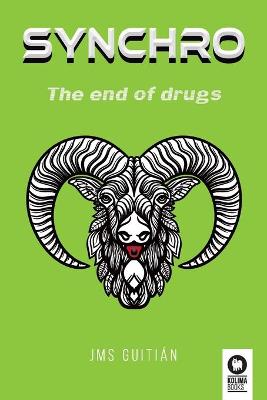 Synchro: The end of drugs

Would you try a new drug, harmless, cheap, legal, without side effects and 100% technological? Julian Konks and Anthony Somoza are two 24-year-old computer genius who have created an algorithm based on Artificial Intelligence capable of modifying and controlling human emotions from a App. It's called Synchro and it works with a microchip that is ingested in the form of a black jelly ball; a minute later, connected by Bluetooth to a mobile device, it is capable of generating any emotion upon demand. The arrival of this technology is a revolution in the world drug market that moves 390,000 million euros a year. The drug cartels know that this will represent the fall of their empires and nobody is going to remain still contemplating the end of such a profitable business. Mexico and the United States are the places where the plot of this disturbing story unfolds and that can be taking place right now. This technology that is going to change the life of Humanity already exists; it is only a matter of time that someone discovers the formula. Go ahead to the future. Would you dare to try Synchro?

» Have you read this book? We'd like to know what you think about it - write a review about Synchro: The end of drugs book by Jose Miguel Sanchez Guitian and you'll earn 50c in Boomerang Bucks loyalty dollars (you must be a Boomerang Books Account Holder - it's free to sign up and there are great benefits!)


A Preview for this title is currently not available.
More Books By Jose Miguel Sanchez Guitian
View All