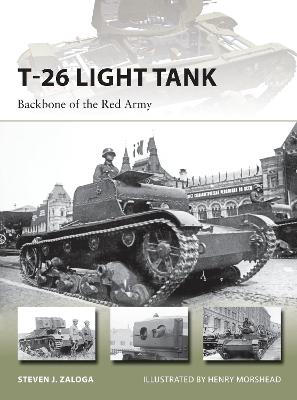 Backbone of the Red Army

The T-26 was the first major Soviet armour program of the 1930s, beginning as a license-built version of the British Vickers 6-ton export tank. Although the T-26 retained the basic Vickers hull and suspension, the Red Army began to make extensive changes to the turret and armament, starting with the addition of a 45mm tank gun in 1933. The T-26 was built in larger numbers than any other tank prior to World War II. Indeed, more T-26 tanks were manufactured than the combined tank production of Germany, France, Britain, and the United States in 1931-40. This book surveys the development of the T-26 as well as its combat record in the Spanish Civil War, the war in China, the border wars with Poland and Finland in 1939-40, and the disastrous battles of 1941 during Operation Barbarossa.

» Have you read this book? We'd like to know what you think about it - write a review about T-26 Light Tank book by Steven J. Zaloga and you'll earn 50c in Boomerang Bucks loyalty dollars (you must be a Boomerang Books Account Holder - it's free to sign up and there are great benefits!)

Steven J. Zaloga received his BA in History from Union College and his MA from Columbia University. He has worked as an analyst in the aerospace industry for over two decades, covering missile systems and the international arms trade, and has served with the Institute for Defense Analyses, a federal think tank. He is the author of numerous books on military technology and military history, with an accent on the US Army in World War II as well as Russia and the former Soviet Union. Henry Morshead is a design consultant in the European automotive and aerospace sectors, with clients including Jaguar, Bentley, Citroen and Airbus. He is also a technical sponsor of the Bloodhound supersonic car, contributing digital surfacing and design services. A former officer in the Royal Engineers and illustrator for Jane's, he maintains a keen interest in the design and use of military land and air vehicles.