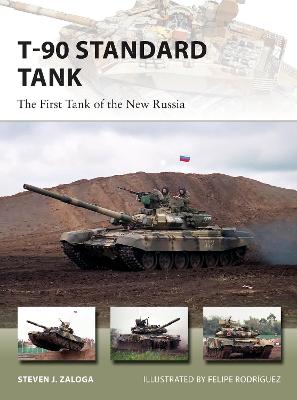 The First Tank of the New Russia

In the wake of the T-72 tank's poor performance in the 1991 Gulf War, the Kremlin instructed the Russian tank industry to drop the discredited T-72 designation in favour of the T-90 Vladimir. The T-90 was in fact a further evolution of the T-72 family, but the name change represented an important break in Russian/Soviet tank design history. The T-90 has become the principal export tank of Russia, and is in service in large numbers in many countries including Algeria, India, and many of the former Soviet republics. Using detailed illustrations and full colour artwork, this book will also describe the evolution of the T-90s many failed successors including the little known Bokser, Molot, and T-95, as well as its likely successor, the new T-14 Armata, and the wide range of specialized vehicles based on the T-90 chassis such as the formidable Terminator tank support vehicle.

» Have you read this book? We'd like to know what you think about it - write a review about T-90 Standard Tank book by Steven J. Zaloga and you'll earn 50c in Boomerang Bucks loyalty dollars (you must be a Boomerang Books Account Holder - it's free to sign up and there are great benefits!)

Steven J. Zaloga received his BA in History from Union College and his MA from Columbia University. He has worked as an analyst in the aerospace industry for over two decades, covering missile systems and the international arms trade, and has served with the Institute for Defense Analyses, a federal think tank. He is the author of numerous books on military technology and military history, with an accent on the US Army in World War II as well as Russia and the former Soviet Union.