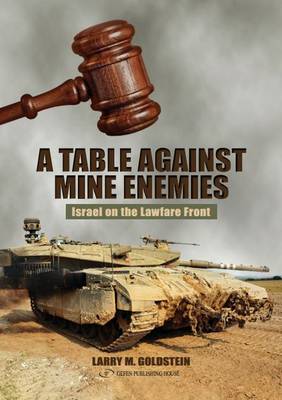 Table Against Mine Enemies

Israel on the Lawfare Front

Description - Table Against Mine Enemies by Larry M. Goldstein

The world is in the midst of a revolution in military affairs, caused by a shift from symmetric to asymmetric war the digitisation and globalisation of information, and the automation of war by robotics and cyber aggression. In this modern environment, a new weapon known as lawfare plays an essential role. Lawfare is the use, or more correctly the misuse, of law as a weapon of combat to embarrass Western countries, to constrain their armies, and in this way to achieve military objectives. The Israeli-Palestinian conflict is the world's leading conflict on this new battlefront. Drawing on the personal stories of soldiers in the Israeli and US armies, as well as the filings at the International Criminal Court, A Table Against Mine Enemies: defines lawfare and related terms through personal stories; explains the four fundamental laws of war on which lawfare attacks are based; details Israel-based examples of lawfare in the separation barrier, the disputed territories, and flotilla attempts to break the blockade against importation of weapons to Gaza; and presents scenarios for the future of war and of lawfare, based on advanced electronics, robotics, cyber attacks, and machine autonomy. Lawfare is in the news every week, and will continue to appear over the coming decades. This book provides the information essential to understanding this new and revolutionary weapon of war.

Book Reviews - Table Against Mine Enemies by Larry M. Goldstein

» Have you read this book? We'd like to know what you think about it - write a review about Table Against Mine Enemies book by Larry M. Goldstein and you'll earn 50c in Boomerang Bucks loyalty dollars (you must be a Boomerang Books Account Holder - it's free to sign up and there are great benefits!)

Larry M. Goldstein is a patent attorney registered with the US Patent and Trademark Office and specializing in information and communication technologies, including computers, communication systems, and software. Prior to A Table Against Mine Enemies, he has written four books about patent quality, patent pools, and the management of patent portfolios. Mr. Goldstein holds a BA from Harvard College, an MBA from the Kellogg School of Management at Northwestern University, and a JD from the University of Chicago Law School. He is a veteran of the Israel Defense Forces and the father of four children serving in the IDF.

A Preview for this title is currently not available.
More Books By Larry M. Goldstein
View All