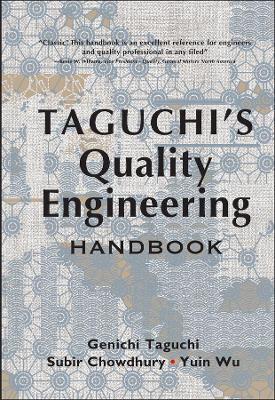 "This book is a great demonstration of this powerful approach andhow it can make a meaningful difference in any type of business. Ittakes a dedicated engineering approach to implement, but thepayback in customer satisfaction and growth is dramatic."

No other single volume presents the full breadth of foundingbeliefs behind the successful engineering practices used by today'sleading companies. Helpful to companies in both manufacturing andservice industries, Taguchi's Quality Engineering Handbookprovides accessible material on such topics as:

* Design of experiments (known as the "Taguchi method")

* AAP Awards for Excellence in Professional and ScholarlyPublishing, 2006

» Have you read this book? We'd like to know what you think about it - write a review about Taguchi's Quality Engineering Handbook book by Genichi Taguchi and you'll earn 50c in Boomerang Bucks loyalty dollars (you must be a Boomerang Books Account Holder - it's free to sign up and there are great benefits!)

A Preview for this title is currently not available.
More Books By Genichi Taguchi
View All