The Tales of Beedle the Bard

Description - The Tales of Beedle the Bard by J.K. Rowling

The Tales of Beedle the Bard have been favourite bedtime reading in wizarding households for centuries. Full of magic and trickery, these classic tales both entertain and instruct, and remain as captivating to young wizards today as they were when Beedle first put quill to parchment in the fifteenth century. There are five tales in all: 'The Tale of the Three Brothers' Harry Potter fans will know from Harry Potter and the Deathly Hallows; 'The Fountain of Fair Fortune', 'The Warlock's Hairy Heart', 'The Wizard and the Hopping Pot' and 'Babbitty Rabbitty and her Cackling Stump' complete the collection. These narrative gems are accompanied by explanatory notes by Professor Albus Dumbledore (included by kind permission of the Hogwarts Headmaster's archive). His illuminating thoughts reveal the stories to be much more than just simple moral tales, and are sure to make Babbitty Rabbitty and the slug-belching Hopping Pot as familiar to Muggles as Snow White and Cinderella.

This brand new edition of these much loved fairy tales from the wizarding world pairs J.K. Rowling's original text with gorgeous jacket art by Jonny Duddle and line illustrations throughout by Tomislav Tomic.
The Tales of Beedle the Bard is published in aid of the Lumos (link to wearelumos.org), an international children's charity (registered charity number 1112575) founded in 2005 by J.K Rowling.
Lumos is dedicated ending the institutionalisation of children, a harmful practice that affects the lives of up to eight million disadvantaged children around the world who live in institutions and orphanages, many placed there as a result of poverty, disability, disease, discrimination and conflict; very few are orphans. Lumos works to reunite children with their families, promote family-based care alternatives and help authorities to reform their systems and close down institutions and orphanages.

Other Editions - The Tales of Beedle the Bard by J.K. Rowling 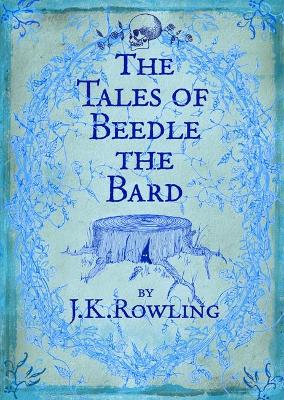 Book Reviews - The Tales of Beedle the Bard by J.K. Rowling

» Have you read this book? We'd like to know what you think about it - write a review about Tales of Beedle the Bard book by J.K. Rowling and you'll earn 50c in Boomerang Bucks loyalty dollars (you must be a Boomerang Books Account Holder - it's free to sign up and there are great benefits!)

J.K. Rowling is the author of the record-breaking, multi-award-winning Harry Potter novels. Loved by fans around the world, the series has sold over 450 million copies, been translated into 79 languages, and made into eight blockbuster films. She has written three companion volumes in aid of charity: Quidditch Through the Ages and Fantastic Beasts and Where to Find Them (in aid of Comic Relief), and The Tales of Beedle the Bard (in aid of Lumos), as well as a screenplay inspired by Fantastic Beasts and Where to Find Them. She has also collaborated on a stage play, Harry Potter and the Cursed Child Parts One and Two, which opened in London's West End in the summer of 2016. In 2012, J.K. Rowling's digital company Pottermore was launched, where fans can enjoy her new writing and immerse themselves deeper in the wizarding world. J.K. Rowling has written a novel for adult readers, The Casual Vacancy, and also writes crime novels under the pseudonym Robert Galbraith. She has received many awards and honours, including an OBE for services to children's literature, France's Legion d'honneur and the Hans Christian Andersen Award.