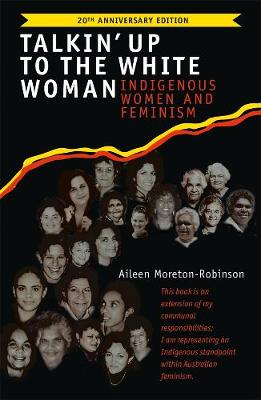 Talkin' Up to the White Woman: Indigenous Women and Feminism (20th Anniversary Edition)

This 20th anniversary edition celebrates this important, ground-breaking book, which remains as relevant as ever.

In this ground-breaking and timeless book, Distinguished Professor Aileen Moreton-Robinson undertakes a compelling analysis of the whiteness of Australian feminism and its effect on Indigenous women. As a Goenpul woman and an academic, she operationalises an Indigenous women's standpoint as she 'talks up', engages with and interrogates western feminism in representation and practice.

Through an examination of an extensive range of feminist literature written predominantly by white scholars and activists, Moreton-Robinson demonstrates how whiteness dominates from a position of power and privilege as an invisible norm and unchallenged practice. She illustrates the ways in which Indigenous women have been represented in the publications and teachings of white Australian women. Such renderings of Indigenous lives contrast with the way in which Indigenous women re/present and understand themselves.

Persuasive and engaging, Talkin' Up to the White Woman is a timely and necessary argument for the inclusion of Indigenous perspectives in the teachings and practices that impact on Australia's pluralistic society. First published twenty years ago, this new edition proves the continued relevance of this classic work as a critique of the whiteness of western feminism.

» Have you read this book? We'd like to know what you think about it - write a review about Talkin' Up to the White Woman: Indigenous Women and Feminism (20th Anniversary Edition) book by Aileen Moreton-Robinson and you'll earn 50c in Boomerang Bucks loyalty dollars (you must be a Boomerang Books Account Holder - it's free to sign up and there are great benefits!)

Use it All: The Cornersmith guide to a more sustainable kitchen
Alex Elliott-Howery
$33.59 $39.99