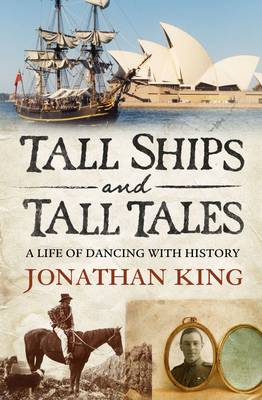 Tall Ships And Tall Tales: A Life Of Dancing With History

Description - Tall Ships And Tall Tales: A Life Of Dancing With History by Jonathan King

Over the last 40 years, Jonathan King has brought history to life, re-enacting events such as the First Fleet's voyage across the high seas to Botany Bay, the mutiny against ship's captain William Bligh on the Bounty, Matthew Flinders' troubled circumnavigation of Terra Australia, Ernest Shackleton's death-defying dash across the icy waters of the Antarctic Ocean, and Marco Polo's passage from China. Along the way, King has encountered a cast of mavericks, rogues, entrepreneurs, dignitaries, and politicians - a veritable who's who of Australia and beyond. These include bushman R. M. Williams, singers Slim Dusty and Helen Reddy, actor Jack Thompson, media magnate Rupert Murdoch, great train robber Ronnie Biggs, explorer Edmund Hillary, boxer Muhammad Ali, Palestinian leader Yasser Arafat, rock star Sting - and even Queen Elizabeth 11. So join this bestselling author and historian as he recounts his spectacular adventures- jackarooing on outback stations; trekking the Amazon to meet a remote tribe; sailing the perilous waters of the Atlantic; riding a traditional junk in the South China Sea; being detained by Spanish border guards; and becoming caught in an Antarctic hurricane, just metres from reaching Shackleton's grave. These extraordinary tales will leave you breathless, dazzled, and inspired by King's persistence and sheer courage in bringing history to life. 'Jonathan King has long been a leader in resurrecting Australian history and breathing new life into it.' Geoffrey Blainey 'As a fellow jackaroo, I recommend you give King a hearing. These are good yarns.' Jack Thompson

Book Reviews - Tall Ships And Tall Tales: A Life Of Dancing With History by Jonathan King

» Have you read this book? We'd like to know what you think about it - write a review about Tall Ships And Tall Tales: A Life Of Dancing With History book by Jonathan King and you'll earn 50c in Boomerang Bucks loyalty dollars (you must be a Boomerang Books Account Holder - it's free to sign up and there are great benefits!)

Jonathan King is an award-winning author of Australian history. He has written 30 books and been published widely in newspapers and magazines, as well as producing and presenting numerous film documentaries, and TV and radio programs. n 1988 he was presented with Australian of the Year Award (Victorian division) and in 1989 the Australian Achiever Award. King helped to organise the first national summit of the Australian Conservation Foundation, and has worked for the UN's Environment Programme, and as director of the Rainforest Foundation.