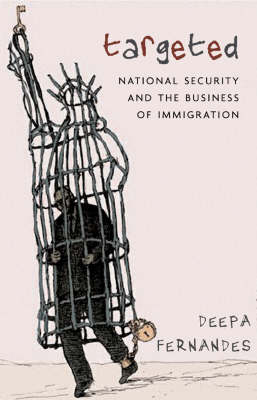 National Security and the Business of Immigration

"Fortress America": the Kafkaesque US homeland security system is exposed. America has always portrayed itself as a country of immigrants, welcoming each year the millions seeking a new home or refuge in this land of plenty. Increasingly, instead of finding their dream, many encounter a nightmare - a country whose cultural and legal system aggressively target and prosecute them. Here, journalist Deepa Fernandes seamlessly weaves together history, political analysis and first-person narratives of those caught in the grips of the increasingly Kafkaesque US Homeland Security system. She documents how in post-9/11 America immigrants have come to be deemed a national security threat. Fernandes, herself an immigrant well-acquainted with US immigration procedures, takes the reader on a harrowing journey inside the new American immigrant experience, a journey marked by militarised border zones, racist profiling, criminalisation, detention and deportation.
She argues that since 9/11, the Bush administration has been carrying out a series of systematic changes to decades-old immigration policy that constitute a roll back of immigrant rights and a boon for businesses who are helping to enforce the crackdown on immigrants, creating a growing "Immigration Industrial Complex". She also documents the bullet-to-ballot strategy of white supremacist elements that influence the new American immigration legislation.

» Have you read this book? We'd like to know what you think about it - write a review about Targeted book by Deepa Fernandes and you'll earn 50c in Boomerang Bucks loyalty dollars (you must be a Boomerang Books Account Holder - it's free to sign up and there are great benefits!)

Deepa Fernandes is the radio show host of Wakeup Call in New York City. Her award-winning radio features have aired on the BBC World Service and Public Radio International. Her writing has appeared in the Village Voice, In These Times and the New York Amsterdam News. This is her first book and is the result of four years of research collecting narratives from immigrants as well as human rights groups, community organisers and lawyers who are challenging the Bush administration policies.