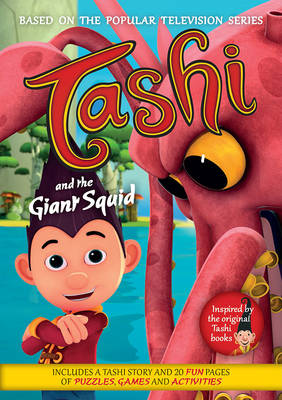 Tashi and the Giant Squid

Description - Tashi and the Giant Squid by Anna Fienberg

It's the Annual Fishing Contest but the valuable golden trophy is missing. Everyone suspects the Baron, but when Tiki Pu's spittoon is stolen too, Jack and Tashi have more than one mystery to solve.

Book Reviews - Tashi and the Giant Squid by Anna Fienberg

» Have you read this book? We'd like to know what you think about it - write a review about Tashi and the Giant Squid book by Anna Fienberg and you'll earn 50c in Boomerang Bucks loyalty dollars (you must be a Boomerang Books Account Holder - it's free to sign up and there are great benefits!)

When Anna Fienberg was little, her mother, Barbara, read lots of stories to her. At bedtime they would travel to secret places in the world, through books. The Tashi stories began when Barbara was telling Anna how she used to tell whoppers when she was a child. Creative fibs. Tall stories. And kids would crowd around her, dying to hear the latest tale. Together they talked about a character like Barbara - someone who told fantastic stories - and over many cups of tea they cooked up Tashi. As well as having his own series, Tashi appears in two splendid picture books, illustrated by Kim Gamble: There Once Was a Boy Called Tashi and Once Tashi Met a Dragon. Flying Bark has been creating iconic animated children's entertainment since 1968. With the international release of two animated feature films and several television series about to launch, the Flying Bark star is still well and truly rising. Flying Bark is located in Sydney, Australia, nestled in between the hub of Newtown and Sydney University.