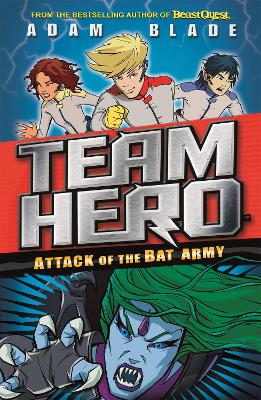 X-Men meets Beast Quest at the school for superheroes! An epic new adventure series from bestselling author Adam Blade - with amazing comic-book style illustrations.There's a new evil escaping from the dark realm of Noxx. Jack and Team Hero must harness their special powers to stop the bat army from destroying the world. Team Hero needs you! Join Jack and battle the forces of darkness ...There are FOUR thrilling adventures to collect in this series - don't miss out! Battle for the Shadow Sword; Attack of the Bat Army; Reptile Reawakened; and The Skeleton WarriorAnd don't forget Adam Blade's other series: Beast Quet and Sea Quest

» Have you read this book? We'd like to know what you think about it - write a review about Team Hero: Attack of the Bat Army book by Adam Blade and you'll earn 50c in Boomerang Bucks loyalty dollars (you must be a Boomerang Books Account Holder - it's free to sign up and there are great benefits!)