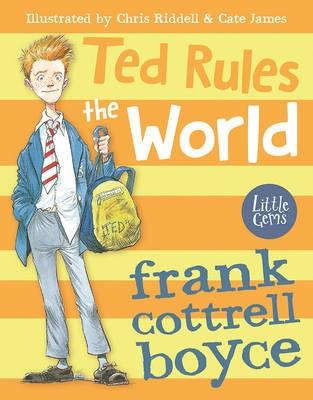 There's something fishy going on. It seems like every great idea Ted has is suddenly being thought of by the new Prime Minister too - now there's new laws about walking to school and everyone has Mondays off! What's Ted to do but test out his new theory.? A laugh-out-loud adventure with a clever twist from a hugely popular author.

» Have you read this book? We'd like to know what you think about it - write a review about Ted Rules the World book by Frank Cottrell Boyce and you'll earn 50c in Boomerang Bucks loyalty dollars (you must be a Boomerang Books Account Holder - it's free to sign up and there are great benefits!)

Frank Cottrell Boyce is a screenwriter and novelist and the writing talent behind the 2012 olympic opening ceremony in London. His novel Millions won the carnegie medal and The Unforgotten Coat won the Guardian children's fiction Prize. Millions was also adapted into a fim directed by Danny Boyle and starring James Nesbitt. The fim was a huge success and won numerous awards, including best Screenplay (british independent film awards). Frank is married with seven children.