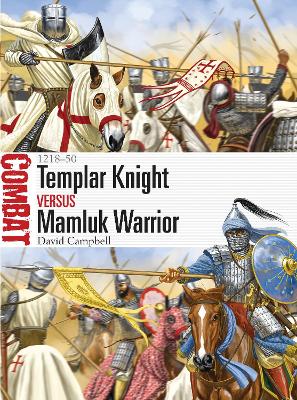 Step into the violent world of the 13th century, where the European states of the Levant battled with Muslim powers for control of Jerusalem. At the cutting edge of the conflict were the elite fighting men of the Crusader and Egyptian armies - the Knights Templar and the Mamluks, respectively. The Templars were the most famous and formidable of the European Military Orders, while the Mamluks were a slave caste whose fighting prowess had elevated them to the point of holding real political power, threatening their Ayyubid masters who relied on them so desperately for military success. This book draws on the latest research to tell the story of three key engagements from the Fifth Crusade to the Seventh Crusade. It reveals the extraordinary ferocity with which these battles were fought, and how the struggle between Templar and Mamluk came to shape the political future of the region.

» Have you read this book? We'd like to know what you think about it - write a review about Templar Knight vs Mamluk Warrior book by David Campbell and you'll earn 50c in Boomerang Bucks loyalty dollars (you must be a Boomerang Books Account Holder - it's free to sign up and there are great benefits!)

David Campbell has worked as a freelance new media producer and content specialist for many years, including roles at IBM, the BBC, various internet consultancies and the civil service. He has a broad range of interests in literature and history, including the Middle Ages, the Napoleonic era, naval warfare, and the genesis of the `military revolution'. He is the author of CBT 007 German Infantryman vs Soviet Rifleman. Johnny Shumate works as a freelance illustrator living in Nashville, Tennessee. He began his career in 1987 after graduating from Austin Peay State University. Most of his work is rendered in Adobe Photoshop using a Cintiq monitor. His greatest influences are Angus McBride, Don Troiani, and Edouard Detaille.

A Preview for this title is currently not available.
More Books By David Campbell
View All