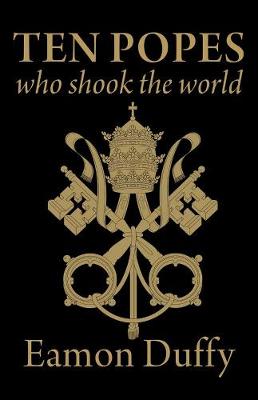 Ten Popes Who Shook the World

Description - Ten Popes Who Shook the World by Eamon Duffy

Of all the men who have served the Catholic Church as pope, who were the ten most influential?

The Bishops of Rome have been Christianity's most powerful leaders for nearly two millennia, and their influence has extended far beyond the purely spiritual. The popes have played a central role in the history of Europe and the wider world, not only shouldering the spiritual burdens of their ancient office, but also in contending with - and sometimes precipitating - the cultural and political crises of their times. In an acclaimed series of BBC radio broadcasts Eamon Duffy explored the impact of ten popes he judged to be among 'the most influential in history'. With this book, readers may now also enjoy Duffy's portraits of ten exceptional men who shook the world.

The book begins with St Peter, the Rock upon whom the Catholic Church was built, and follows with Leo the Great (fifth century), Gregory the Great (sixth century), Gregory VII (eleventh century), Innocent III (thirteenth century), Paul III (sixteenth century), and Pius IX (nineteenth century). Among twentieth-century popes, Duffy examines the lives and contributions of Pius XII, who was elected on the eve of the Second World War, the kindly John XXIII, who captured the world's imagination, and John Paul II, the first non-Italian pope in 450 years. Each of these ten extraordinary individuals, Duffy shows, shaped their own worlds, and in the process, helped to create ours.

» Have you read this book? We'd like to know what you think about it - write a review about Ten Popes Who Shook the World book by Eamon Duffy and you'll earn 50c in Boomerang Bucks loyalty dollars (you must be a Boomerang Books Account Holder - it's free to sign up and there are great benefits!)

Eamon Duffy is professor of the history of Christianity, Cambridge University, and fellow and former president of Magdalene College. He is the author of many prizewinning books, among them Fires of Faith, Marking the Hours, and Saints and Sinners, all available from Yale University Press. He lives in Cambridge, UK.

A Preview for this title is currently not available.
More Books By Eamon Duffy
View All