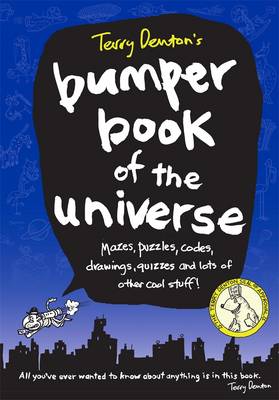 From the bestselling Terry Denton Bumper Books comes the next fantastic addition. Full of fun drawing activities, whacky cartoons, codes and quizzes, Terry Denton's Bumper Book of the Universe is sure to nurture every child's creativity and entertain them for hours.

With all the activities and fun of the previous Bumper Books plus added facts, codes and a touch of philosophy, it's a must-have for all young, inquisitive minds.

» Have you read this book? We'd like to know what you think about it - write a review about Terry Denton's Bumper Book Of The Universe book by Terry Denton and you'll earn 50c in Boomerang Bucks loyalty dollars (you must be a Boomerang Books Account Holder - it's free to sign up and there are great benefits!)

TERRY DENTON has been illustrating and writing children's books for over 30 years, with titles such as the Gasp! books and animated TV series, and the Just! books and the Treehouse series with Andy Griffiths. He has also worked with many of Australia's top authors and won more than 40 children's choice awards throughout Australia and been shortlisted many times in the Children's Book Council of Australia awards. His Felix and Alexander won Picture Book of the Year in 1986. Terry grew up with 4 brothers in inner Melbourne and spent a happy childhood playing around the Yarra River environs. He loved sport and maths and science at school, but had a secret passion for drawing. He always dreamed of becoming an animator but somehow he fell into illustration and writing. He lives by the sea in bayside Melbourne.

The One Hundred-Year-Old Man Who Climbed Out The Window And Disappeared
Jonas Jonasson
$16.99 $19.99