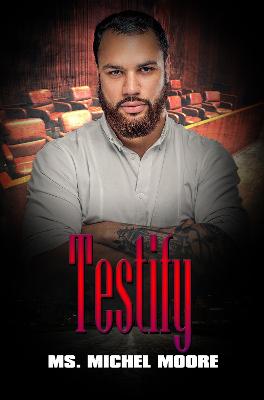 Ms. Michel Moore returns with an explosive new book about seven witnesses testifying against a man who ruthlessly controlled the drug scene in Detroit until a fateful mistake...

Clay has never depended on anyone but himself. Having been to prison twice, the veteran criminal feels he has nothing left to lose. He rules his small territory of the Detroit drug scene with an iron fist, acting as the police, the judge, and the jury. Clay is without remorse. Anyone who crosses him or jeopardizes his freedom will be dealt with, and justice will be swift.

Clay has always been cursed with a short-fuse temper, but this time it causes him to make a mistake that could bring him down for good. Feeling betrayed, he explodes, committing cold-blooded murder on a crowded city block. In an ironic twist, he leaves seven eyewitnesses alive. They were always forced to live by his strict street code commandments, but now they will be the ones to testify. Ultimately, Clay's fate is in their hands.

Other Editions - Testify by Michel Moore » Have you read this book? We'd like to know what you think about it - write a review about Testify book by Michel Moore and you'll earn 50c in Boomerang Bucks loyalty dollars (you must be a Boomerang Books Account Holder - it's free to sign up and there are great benefits!)

Ms. Michel Moore is the sole founder of Say U Promise Publications. She is dedicated to investing back into her community. A respected businesswoman and Detroit activist, she has reached goals that once looked unattainable. Follow Ms. Moore on Twitter at @DETROIT AUTHOR.