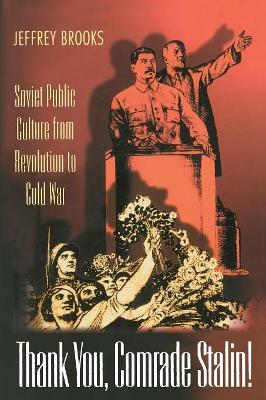 Thank you, our Stalin, for a happy childhood." "Thank you, dear Marshal [Stalin], for our freedom, for our children's happiness, for life." Between the Russian Revolution and the Cold War, Soviet public culture was so dominated by the power of the state that slogans like these appeared routinely in newspapers, on posters, and in government proclamations. In this penetrating historical study, Jeffrey Brooks draws on years of research into the most influential and widely circulated Russian newspapers--including Pravda, Isvestiia, and the army paper Red Star--to explain the origins, the nature, and the effects of this unrelenting idealization of the state, the Communist Party, and the leader. Brooks shows how, beginning with Lenin, the Communists established a state monopoly of the media that absorbed literature, art, and science into a stylized and ritualistic public culture--a form of political performance that became its own reality and excluded other forms of public reflection.He presents and explains scores of self-congratulatory newspaper articles, including tales of Stalin's supposed achievements and virtue, accounts of the country's allegedly dynamic economy, and warnings about the decadence and cruelty of the capitalist West. Brooks pays particular attention to the role of the press in the reconstruction of the Soviet cultural system to meet the Nazi threat during World War II and in the transformation of national identity from its early revolutionary internationalism to the ideology of the Cold War. He concludes that the country's one-sided public discourse and the pervasive idea that citizens owed the leader gratitude for the "gifts" of goods and services led ultimately to the inability of late Soviet Communism to diagnose its own ills, prepare alternative policies, and adjust to new realities. The first historical work to explore the close relationship between language and the implementation of the Stalinist-Leninist program, Thank You, Comrade Stalin! is a compelling account of Soviet public culture as reflected through the country's press.

» Have you read this book? We'd like to know what you think about it - write a review about Thank You, Comrade Stalin! book by Jeffrey Brooks and you'll earn 50c in Boomerang Bucks loyalty dollars (you must be a Boomerang Books Account Holder - it's free to sign up and there are great benefits!)

Jeffrey Brooks is Professor of European History at The Johns Hopkins University. He is the author of When Russia Learned to Read (Princeton), which won the Vucinich Prize of the American Association for the Advancement of Slavic Studies, and of many articles on Russian and Soviet culture and politics.

A Preview for this title is currently not available.
More Books By Jeffrey Brooks
View All