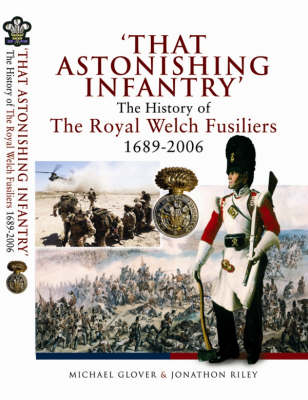 The Royal Welch Fusiliers were present at all Marlborough's great victories; they were one of the six Minden regiments; they fought throughout the Peninsula and were present at Wellington's final glorious victory at Waterloo. In The Great War their officers included the writer poets Siegfried Sassoon and Robert Graves; their 22 battalions fought not just on the Western Front but at Gallipoli, in Egypt, Palestine, Salonika, Mesopotamia and Italy. In WW2 they won battle honours from the Reichswald to Kohima. More recently they have served with distinction in the war against terror in the Middle East. Like so many famous regiments the RWF are no longer in the British Army's order of battle having been amalgamated into the Royal Regiment of Wales. But this fine book is the lasting memorial to a fiercely proud and greatly admired regiment. SELLING POINTS: The definitive history of a famous regiment, now disbanded. In over 300 years the REgiment has missed very few battle honours. Proudly remembered and loved nationwide and not just in Wales. Illustrated

» Have you read this book? We'd like to know what you think about it - write a review about That Astonishing Infantry book by Michael Glover and you'll earn 50c in Boomerang Bucks loyalty dollars (you must be a Boomerang Books Account Holder - it's free to sign up and there are great benefits!)


A Preview for this title is currently not available.
More Books By Michael Glover
View All

John Ruskin: An Idiosyncratic Dictionary Encompassing his Passions, his Delusions and his Prophecies
Available, ships in 7-10 business days
$44.09 $44.99