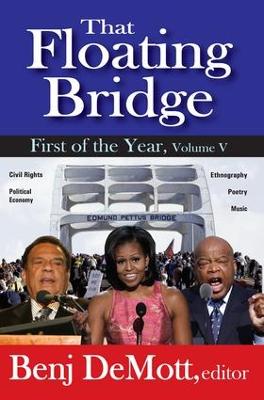 Alive to history in the making (and the weight of the past) this volume examines Obama's presidency and Lyndon Johnson's, the killing of Trayvon Martin and the death of Andrew Breitbart, Occupy Wall Street and "America Beyond Capitalism." It presents essays, poems, and plays that speak to our times and challenge the liberal imagination. The title, That Floating Bridge, evokes Representative John Lewis' line-"Obama is what comes at the end of that bridge in Selma"-as it quotes a track on Gregg Allman's Low Country Blues, which Scott Spencer lauds here in a review for the Ages.

An account of how Franz Boas "did more to combat race prejudice than any other person" anchorsone section, but the volume also addresses devolutions of "diversity" linked with careerism in the art world and academe. An un-scholastic section titled "Criticism of Life"celebrates older and younger critics/poets. Songs are key to this volume's good times. Music writing-ranging from Eddie Hinton's Very Extremely Dangerous to Berlioz's Romeo and Juliet-enhances the pleasures of this text.

Other Editions - That Floating Bridge by Benj DeMott 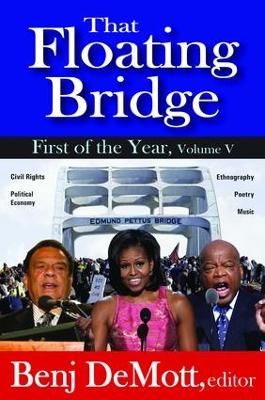 » Have you read this book? We'd like to know what you think about it - write a review about That Floating Bridge book by Benj DeMott and you'll earn 50c in Boomerang Bucks loyalty dollars (you must be a Boomerang Books Account Holder - it's free to sign up and there are great benefits!)

Benj DeMott has written for the City Sun , the Village Voice , and various academic journals. He's edited First of the Month , along with Charles O'Brien and Armond White, since 1998.

A Preview for this title is currently not available.
More Books By Benj DeMott
View All