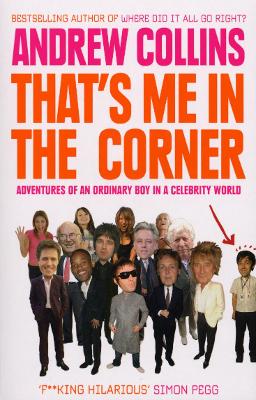 That's Me in the Corner

Adventures of an ordinary boy in a celebrity world

Description - That's Me in the Corner by Andrew Collins

Fast approaching his fortieth birthday, Andrew is cornered at a family gathering by the nine-year-old son of his brother-in-law's sister. Having seen him as a talking head on TV, the boy asks, 'What are you?' It is a question so frank and simple that Andrew doesn't have an immediate answer to hand.So, with hilarious self-deprecation, he sets out to retrace how he got to where he is today. Seventeen precarious jobs in seventeen years- from trolley collector at Sainsbury's to high-flying film critic sipping cocktails with Will Smith and Jerry Bruckheimer on a yacht in Cannes. This is Andrew's tale of rubbing shoulders with the world's biggest stars- pissing off Christini Ricci, having his hairstyle mocked by Noel Gallagher, trying not to wake Clive James from his afternoon nap, having his apple pie eaten by Bob Geldof, and somehow stumbling into the next dream job.Along the way, he's been the world's worst gossip columnist, an almost-hip young gunslinger at the NME, a Radio 1 DJ (enduring a hellish Radio 1 roadshow in a car park in Birmingham), an ITV presenter, EastEnders scriptwriter, ghost writer for a major TV personality and much, much more. It charts a world of hedonism, mundanity, towering egos, shallow idiocy and occasional moments of mind-blowing joy. And, of course, being sent shit in a box.

Buy That's Me in the Corner by Andrew Collins from Australia's Online Independent Bookstore, Boomerang Books.

Book Reviews - That's Me in the Corner by Andrew Collins

» Have you read this book? We'd like to know what you think about it - write a review about That's Me in the Corner book by Andrew Collins and you'll earn 50c in Boomerang Bucks loyalty dollars (you must be a Boomerang Books Account Holder - it's free to sign up and there are great benefits!)

Andrew Collins was born in Northampton. He has written for NME, Q, Select, Observer, New Statesman, Word, Guardian and Radio Times. He won a Sony Gold award for Collins & Maconie's Hit Parade on Radio 1, hosted Radio 4's weekly film programme Back Row, presents his show on BBC 6 Music, fronts The Day The Music Died on Radio 2 and co-presented Collins & Maconie's Movie Club on ITV. His first sitcom, Grass, written with Simon Day, aired on BBC2 in 2003. He is married with cats and lives in London.

A Preview for this title is currently not available.
More Books By Andrew Collins
View All

Denisovan Origins: Hybrid Humans, Goebekli Tepe, and the Genesis of the Giants of Ancient America
$33.99 $39.99