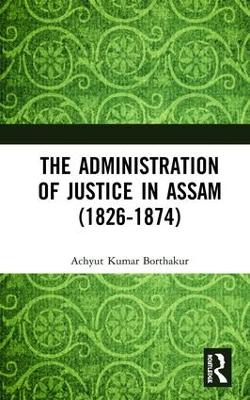 Based on original sources, this volume is a pioneering work in the study of the growth and development of judicial administration in Assam since the beginning of the East India Company's rule in the province till it was separated from the Bengal Presidency in 1874. In view of the fact that Assam had its own laws and codes different from those of other provinces of British India, this work is unique and pioneering in its reach.
Assam was administered under non-regulation system which had its origin in the neighbouring province of Bengal and was governed by a mixed system of local and regulation laws. In the administration of civil justice, the Bengal regulations were entirely dispensed with, while in criminal administration the regulations were followed more or less. Since the occupation of the province by the Company's government till 1837 the fundamental drawback of the entire judicial administration was the want of a definite code of law, the absence of which confused the administrators in delivering justice. It was only in 1837 that rules for the civil and criminal administration, popularly known as the Assam Code, were drafted and judicial administration in the province found a sound footing.
The presentation and analysis of the laws and codes prepared by the Government of Bengal in its executive capacity in consultation with the local authorities in Assam is the most distinctive feature of this comprehensive work.

» Have you read this book? We'd like to know what you think about it - write a review about The Administration of Justice in Assam (1826-1874) book by Achyut Kumar Borthakur and you'll earn 50c in Boomerang Bucks loyalty dollars (you must be a Boomerang Books Account Holder - it's free to sign up and there are great benefits!)